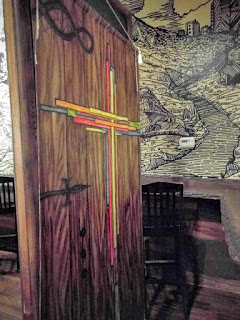 In Ohio, we finally went to a place that is both a bar and a church, although the two functions don’t overlap. Every day of the week Black Cloister is a bar, but on Sunday mornings, before the bar opens, the space is also home to a church. Unlike a few other churches that hold worship services or Bible studies in bars, there’s quite a connection between the two entities. Tom Schaeffer is both lead pastor of Threshold Church and CEO, GM, and Marketing Brewmaster of Black Cloister Brewing Company.

We visited twice; on Friday night we stopped in Black Cloister for drinks, and on Sunday morning, we came to the same address for worship with Threshold Church. 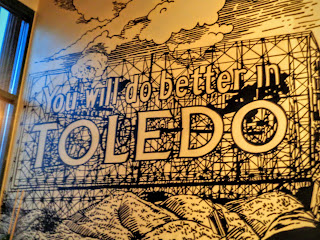 On Friday night, Toledo was a lively place. The pub is within blocks of a strip club (which had a pathetic sign advertising “college scholarships” for dancers) and, more happily, within blocks of the Mud Hens Baseball Stadium (we were able to walk into the stadium without a ticket in the 9th inning, and the Hens were winning). There were a lot of people in the streets, and there was a good crowd in the Black Cloister.

We went with our new friends from Mosaic Ministries, David and Kelly. David had a beer, Kelly had a white wine spritzer, Mindy had rose, and I had a pineapple cider. Sadly, David one among us who’s a fan of beer in this place that celebrates the art of brewing. 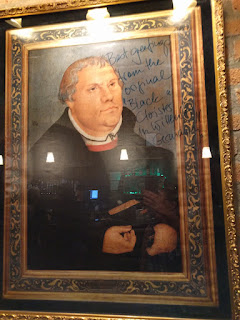 The pub is decorated with Reformation-era themed art and signs. Martin Luther was a fan of beer (his wife, Katie, the former nun, was the brewer in the family) as well as a theologian, so he fits in happily at the pub and the church, which is affiliated with the Evangelical Lutheran Church of America. A Kickstarter campaign was used to start the Black Cloister, and a banner on the wall honors the “95 Heroes” of the campaign (echoing Luther’s 95 Theses nailed to the Wittenberg door which kick started the Reformation).

Kelly answered that at a bar, “I hope for a wide variety of drinks, because I don’t like beer but I want to try different things. I want to come with friends and be able to talk. I’m not looking to meet new people.” 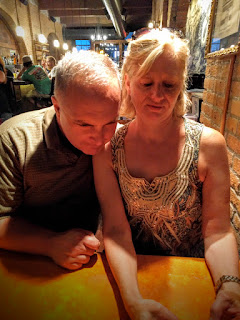 David said he appreciates “the ability and willingness to make a good Mojito. Lots of bars won’t make one or use a bad mix.” He also likes creative mixed drinks with clever names.

As for a church, Kelly said she looks for “vulnerability. It should be okay to be different and have issues and not be shamed. People should be allowed to have problems.” She said she’s been to churches where people are clean on the outside but not inside. I was reminded of Jesus referring to the Pharisees as “whitewashed graves.”

David said worship is important, because that is what we’ll spend doing forever. He said the “worship should draw out the heart and draw people closer to Jesus.” It should teach the Word, making “self-supporting disciples rather than dependents.” There should be “grace and joy in expressing the love of Christ.” 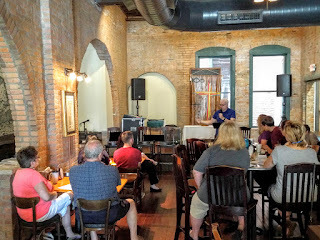 On Sunday at 11:00 am, we returned to Black Cloister with David and Kelly for worship. No beer was being served (on Sundays, the bar opens at 1:00 pm), and children were present. Coffee, water, orange juice and hot water for tea or cocoa were available, along with muffins and coffee cake. A number of people greeted us, including Pastor/ Brewmaster Tom. We weren’t the only “media” people present. A local photographer was taking pictures for Living Lutheran.

I met a couple, Dave and Kylie, before worship began, and asked them what they like about this church. Kylie answered, “God’s here. It’s a happy place. It’s a community.” 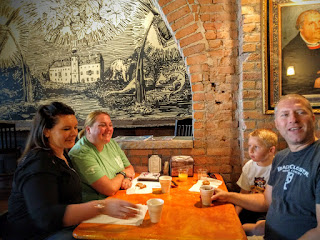 Dave responded, “Tom’s a good teacher. And the church is missional-based, concerned for reaching out. It’s not judgemental.” They’ve attended the church for ten years through four different moves, including a time when they were meeting in people’s backyards.

The service began, people took their seats at tables, and we sat at the bar. During the announcements, people were invited back to Black Cloister for Table Talk on Tuesday night, a time of “fun and fellowship.” People were reminded of Trivia Night at the pub, noting that people from the church “win more often than not.” And there was an announcement for a “Leadership Huddle” right after the worship service. 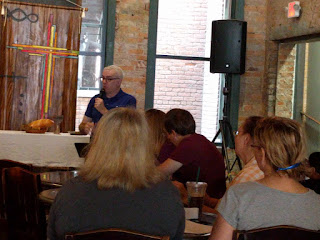 The sermon was the third in a series on the Lord’s Prayer. (The sermon notes handout uses a hexagon for note taking. Apparently Tom likes to use geometric figures to illustrate theological points.) He spoke about the section of the prayer that is a request for daily bread. Speaking of God’s provision, he referred to the story of Abraham’s (near) sacrifice of his son Isaac. (“It’s a brutal, crazy story, there’s no denying that.”) The basic point of the sermon was “being in relationship with God means you know He will provide.” 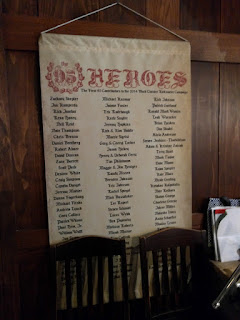 During the prayer time after the sermon, people were urged to stand and give either their request or their praise. The congregation responded with either “Lord have mercy” or “Let us bless the Lord.” The Lord’s Prayer concluded the prayer time, followed by Communion, with all who trust Jesus for salvation invited to the Lord’s Table (the gluten-free alternative was served first). Mindy and Kelly both commented on the quality of the wine and bread.

As we sang the closing chorus, a bartender quietly signed in and began setting up for the pub’s 1:00 opening.

After the service, I had a chance to talk with Pastor Tom about both Threshold and Black Cloister before the leadership huddle. I asked him about the strengths of the church. “We moved four times, and that taught us not to rely on the building,” he said. The church first met in a nightclub, the Omni, but shoes sticking to the floors (among other things) proved a problem. 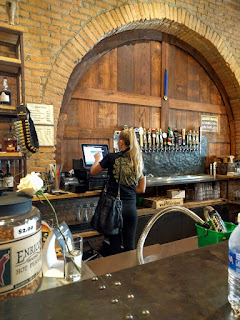 The church is very mission oriented. “Though we’re small, when we do a missions project, everyone shows up.” They’ve been involved with Just Pancakes, which serves over 3.000 pancakes every Saturday morning. Threshold has also served with Food for Thought.

I asked about the challenges of being a church that meets in a bar. He said that people in the congregation had urged him to start the brewing company, and before they began, held a town hall meeting with other Lutheran churches in the area. The other churches voiced their concerns, but eventually, they agreed to disagree. Overall, Tom believes the downtown location provides great opportunities for ministry.

Then I asked about Black Cloister. Tom said he believes that, ideally, every business and organization should seek to make the world a better place. At Black Cloister, they do try to do that:  a portion of the profits from one of their brews goes to the families of fallen firefighters. 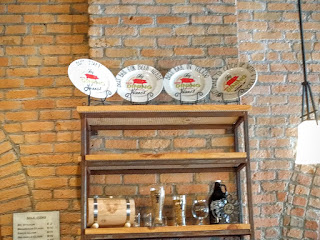 He said the staff of the pub often joins in with the church on service projects. Once, when an employee heard about a formerly homeless person who’d gotten an apartment, the rest of the staff worked together to furnish the new home. No wonder a local publication gave Black Cloister the award for best bar staff, along with best bar. And the best beer for nerds.

I asked Tom about the challenge of handling alcohol responsibly, since obviously what happens at the pub can reflect on the church. He said they train the staff to avoid “over serving” guests. They call taxis for guest when needed (though he noted that state law prohibited taking people’s car keys). They serve liquor, but only top shelf, expensive brands, which makes shots less of a thing. Their “mug club” has “Rules of the Order” based, to some extent, on the Benedictine Rules of Order. Among other things, it explicitly encourages responsible drinking. 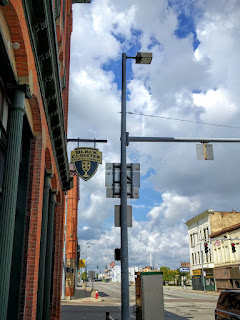 We left Threshold Church as the building was morphing back into Black Cloister; a church and a bar, both seeking to make the world a better place.

Statistics
Service Length: 58 minutes
Sermon Length: 20 minutes
Visitor Treatment: we were greeted by more than one person on arrival; there’s no record of attendance that we were aware of
Followup by Tuesday Morning: none
Our Rough Count: 32
Probable Ushers' Count: no ushers
Snacks: coffee, cold water, hot water for tea and cocoa, orange juice, muffins, coffee cake (the bar was open after the worship service, but we didn’t notice anybody ordering)
Musicians: acoustic guitar (man)
Vocals (2 women)
Songs: “Meet with me”
“Breathe”
“Your Great Name”
“You are my King/Amazing Love”
“Hand that Holds the World”
Miles to church: 7
Miles from start: 36,034
Total 2016 Miles: 35,738
Church website: http://www.crossthethreshold.com/