We go to church for s'more 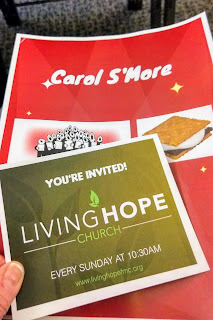 There's an online game called Whamageddon. The object of the game is to make it through the Christmas season without hearing “Last Christmas” by that ‘80’s pop sensation, Wham!

It’s a worthy goal. The song about a singer who gave away his/her heart the previous yuletide but this year is saving it for “someone special” is beyond inane. Mindy and I lost the game the other day. The car radio was tuned to a station that plays oldies during the week and Christmas songs on the weekend, and there it was: “Now I know what a fool I’ve been, but if you kissed me now, I know you’d fool me again.” I felt like a fool for listening to this tripe. 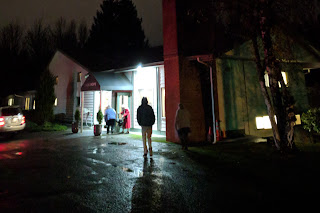 This is a long way to say that though Christmas songs are on the radio, in almost every store, maybe even playing at work, good Christmas music needs to be sought out. 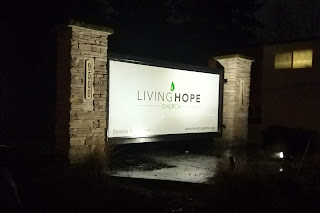 We sought it out at a Living Hope Free Methodist Church in Bothell on Sunday night. The church was hosting a special event, “Carol S’more.”

It was a dark, cold, rainy night, and entering the bright, warm church was especially pleasant. A smiling woman handed me a program and said, “The words are the same as the ones we’ll be singing. Unless it’s a joke.” (The song sheets in the program were accurate. So that wasn’t a joke. But saying it might be a joke, was, in fact, a joke.) 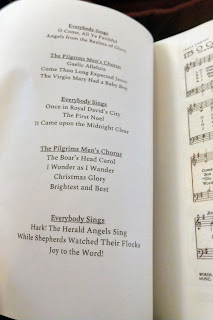 We seated ourselves in the middle of the sanctuary, near small children and a service dog -- which made the service even more pleasant. (Pro tip: dogs and small children make everything in life a little more pleasant -- especially when they're not your responsibility.) The pianist’s prelude included “Christmas Time is Here” from A Charlie Brown Christmas.

Pastor Kyle welcomed people to the service (“I’m sure I greeted many of you by saying “Good morning”) and introduced "The Pilgrims" men’s chorus, representatives of New Horizons Ministry. The service format alternated between “Everybody Sings” and The Pilgrims singing. Some of the songs might be heard on your local Christmas music station (“The First Noel,” “O Come All Ye Faithful”) but there are songs I love (“Angels from the Realms of Glory,” “While Shepherds Watched Their Flocks by Night”) that you have to go to church to hear. 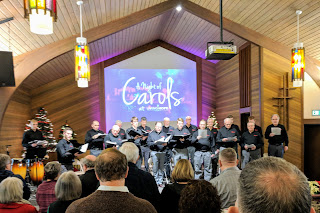 There was a break in the singing when Kristina, the pianist, gave an introduction to the work of New Horizons, an outreach to homeless youth in the Seattle area. The estimated 1,500 homeless young people in the area (70% of whom recently exited the foster care system) are in need of assistance. New Horizons provides meals, housing, legal counsel, job training, and other necessary services, all with the bedrock goal of proclaiming the Gospel of Jesus Christ. (People seemed eager to contribute to the offering, all of which would go directly to the ministry.) 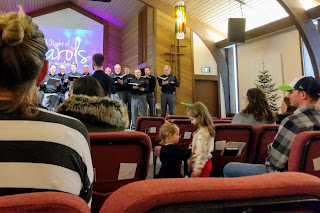 The service concluded with a couple of my favorite carols: “Hark! The Herald Angels Sing” (a theologically profound song with lyrics like “veiled in flesh the Godhead see”) and “Joy to the World” (which probably could, and should, be sung all year long). 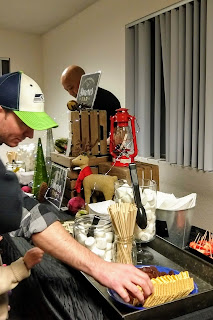 After the singing ended, everyone was invited to enjoy indoor s’mores. In a nearby room, sterno cans were lit down the center of four tables. At other tables, a selection of elements for making classic or gourmet s'mores was available along with skewers for toasting the marshmallows over the flames.  Graham crackers, brownie bites, Hershey’s milk and cookies and cream chocolates, and strawberries (!?!) were available.

Pastor Kyle had said it was a night to celebrate our God and King Jesus Christ, and the evening did just that. And not once did we have to debate the morality of “Baby It’s Cold Outside.” 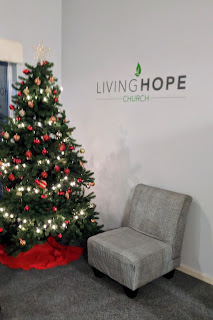 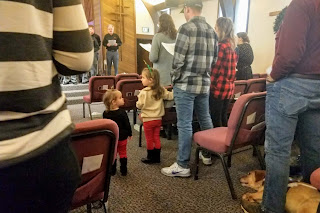 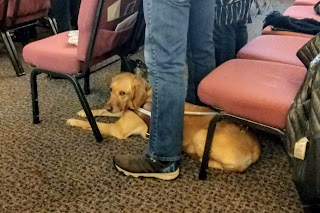 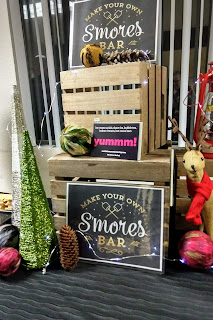 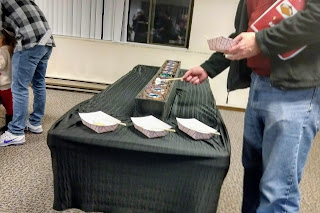 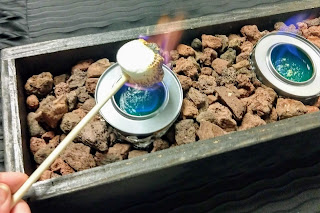 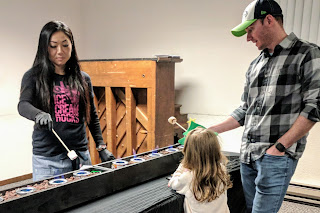 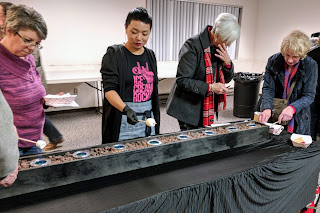 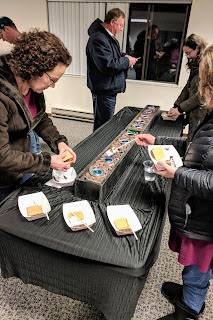