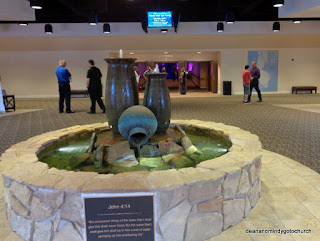 "Our church is debt free," Pastor Jeff Perkins announced, "Country Church always gets everything first; including the jokes that don't make it to Sunday morning."

Obviously, becoming debt-free was exciting news for this large church with a great variety of ministries. The church had owned an assisted living facility, Herron House, and the sale of the property had just gone through. Pastor Perkins was excited to tell the news with its implications of opportunities to come. 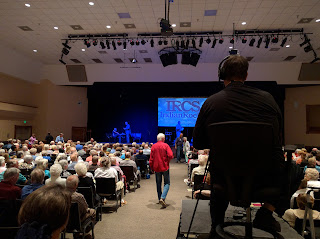 "Country Church" is the Saturday evening worship service at First Baptist Indian Rocks.* The service isn't held on the farm with chickens roaming free -- though the gathering is usually held in the sanctuary, we met this week in the fellowship hall with dining facilities. The service usually goes by that name because the music style is country western. 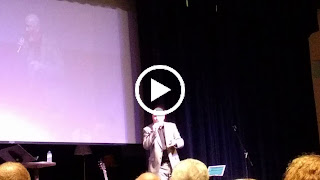 The night we attended there was a special guest, Kenny Evans, an evangelist and a regular performer at musical theaters in Pigeon Forge, TN. On most Saturday evenings, there's a time of congregational singing before the sermon, but tonight, Evans sang several country gospel songs as well as Christianized versions of Only You by the Platters and How Sweet It Is by Marvin Gaye ("I want to stop and thank you, Jesus").

For Palm Sunday Eve, Pastor Perkins used the crucifixion passage from Luke 23, focusing on the forgiven thief on the cross as he continued a series on lesser known stories of the Bible. "We have made the Scriptures complicated when they are, in fact, very simple," Pastor Perkins said. He used the story to illustrate that salvation comes by grace through faith and not by works. 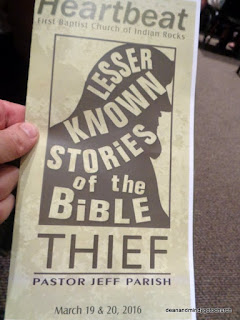 He pointed out that the thief acknowledged his sin, admitting that the punishment he was suffering was justified. "Some people don't want to admit that they've ever done anything wrong. I won't comment on that." (What may have been a commentary on the leading Republican candidate received chuckles, but was not repeated in the version of the sermon we heard the next day.) 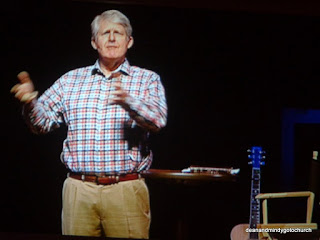 Perkins pointed out that the thief didn't have access to many of the things many consider essential for salvation such as baptism, communion or church membership. "No church or denomination owns this message." He pointed to Jesus' assurance that the thief would be in paradise to argue that we can also have assurance of salvation (also referencing I John 5:13). He also argued that Jesus' statement, "Today you will be with me in Paradise," ruled out both the doctrine of Purgatory and the descent of Jesus into Hell. ("I did a word study on 'today'. And 'today' means 'today'.")

The room seemed packed to near capacity that evening, with between six and seven hundred people in attendance. I remarked later to Pastor Perkins that there seemed to be more people at that service than in the Sunday morning service we attended. He said that Country Church attendance dropped once winter ended, due to Snow Birds' migratory patterns (there definitely seemed to be a senior citizen dominance in the Saturday night crowd). The attendance in the three Sunday morning services remains more stable throughout the year. 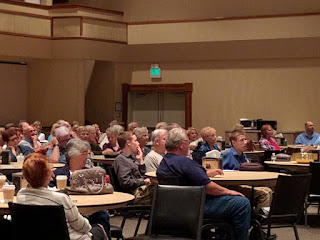 Following the service, a "fifties diner" menu of hot dogs and hamburgers was available for purchase. (On Wednesday, when we'd been at Indian Rocks for dinner and the mid-week worship service, we'd enjoyed a fried chicken dinner in the same room.) After the brief dinner break, Kenny Evans performed a free concert of hits from the '50s, '60s, and 70s (Unchained Melody, Can't Help Falling in Love with You, etc.).

Obviously, to have such an event, you need a church of a certain size. Mindy calls her parents pretty much every Sunday, and occasionally her dad (a retired pastor) will ask why we usually go to small churches.  One reason is that statistics say the median size of churches in the U.S. is 75 members. A smaller church can sustain only a limited number of ministries. 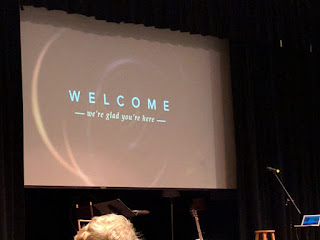 Indian Rocks has a large facility that allows a great variety of ministries.  Their Celebrate Recovery program (dealing with substance abuse) is sizeable. They have programs for every age group and stage of life, from children to students to singles to married with kids to seniors. There are programs to help those dealing with loss and grief. We heard an announcement for disaster relief training. The church teams with others in the community in the Pack-a-Sack program to provide food for children in the community on weekends when school lunches aren't available. 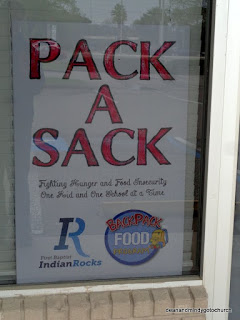 The church has a strong focus on missions with a program called Acts 1:8 ("You will be my witnesses in Jerusalem and in all Judea and Samaria and to the ends of the earth.") This was particularly important to the friends we were staying with, John and Bonnie Nystrom, who serve with Wycliffe Bible Translators. Every missionary sponsored by the church has assigned "Champions;" people who follow their ministry and advocate for them within the congregation.

The church also runs a large thrift store that raises money for special needs and missions projects. (The church bulletin had a help wanted ad that included a full-time job at the thrift store.) 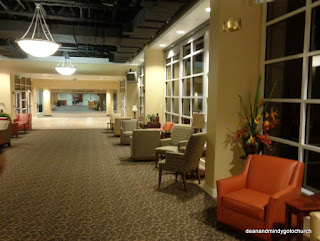 A very cool ministry associated with the church is the Lord's Volunteer Army, which provides construction, handyman, landscaping, and moving services to those in need. Anyone (in church or out) can apply for the services. If someone can afford to pay for supplies, they do, but if they can't, donations meet those needs. John and Bonnie are in the process of relocating Bonnie's parents to a renovated house next door to their own, and they were very grateful for the Army's services the week before. 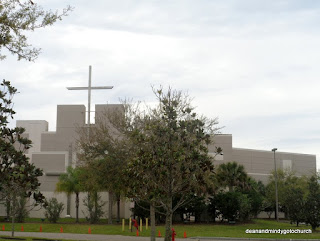 I talked to Dave about how long he'd been involved with the church. He said that ten years ago, he and his wife had a one year old child, and they realized they needed help. So they came Indian Rocks and have been a part of things ever since.

When I asked Pastor Perkins about the strengths of Indian Rocks, he said that the church taught the Word of God in a way people could understand and they provided fellowship. We were appreciative of both of those things in our short stay. 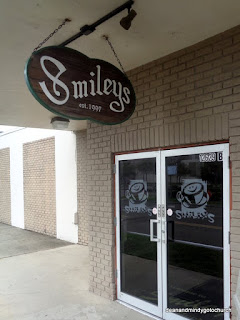 Because of our other blog, Dean and Mindy Walk into a Bar, I need to mention one other thing about Indian Rocks. For years, a bar was adjacent to their property. The church decided years ago they could use that property and its access to the road. When the owner of the bar finally allowed them to buy the property, the purchase included its liquor license. The church had the license, but didn't use it, for four years until the license expired. Such a shame. Our week would have been so much simpler if they'd kept that bar open.

*The church was founded in 1958, but the community of Indian Rocks no longer exists under that name.

Statistics
Country Church (Saturday night at 6:30 pm)
Service Length: 1 hour 29 minutes
Sermon Length:  55 minutes
Visitor Treatment: During the greeting time, people were encouraged to greet those around them (and they did). Visitors were encouraged to fill out a card attached to the bulletin and to drop it into the offering plate. (Because of the concert, there were more visitors than usual)
Followup by Tuesday Morning: none
Our Rough Count: 628
Probable Ushers' Count: 650
Snacks: hot dogs, hamburgers, sodas, fries, and other "diner food" was available for purchase after the worship service; coffee and other treats were available for purchase in the church's coffee shop before and after the worship service.
Musicians: visiting musician Kenny Evans (with a recorded track accompanying him)
Songs: My Temporary Home
When King Jesus Comes to Live with us Again
How Sweet it is to be Loved by You
Only You
Midnight Cry
Church website: indianrocks.org 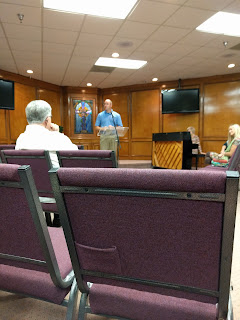 Statistics
Traditional service (Sunday morning at 8:00 am in the Chapel)
Service Length: we're not sure; we arrived a minute or two late and had to leave at about 8:50 in order to be at the HD service on time.
Sermon Length: When we left, the sermon had been going on for 22 minutes
Visitor Treatment: During the greeting time, people were friendly; though we filled out the visitor card attached to the bulletin, offering plates weren't passed down our row -- probably since we were visitors and not expected to put money in the plate. Though it was a small, presumably consistent group, nobody went out of their way to introduce themselves to obvious visitors.
Followup by Tuesday Morning: none
Our Rough Count: 40
Probable Ushers' Count: 45
Snacks: none (coffee shop might have been open, but we were running late and didn't notice)
Musicians: Miss Evelyn on piano, Miss Ashley sang a solo, and another woman led the singing
Songs: Were you there?
Lead me to Calvary
In the Garden (solo; congregation humming along) 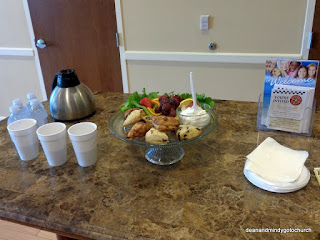 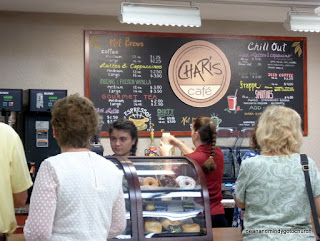