We go to a church in transition 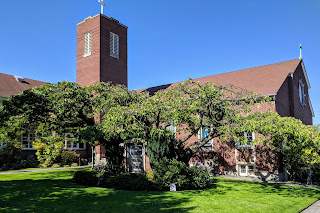 West Side Presbyterian Church, Seattle, Washington
“Summer is full of comings and goings,” Pastor Shari mentioned early in the morning worship service. The high schoolers were just returning from the MOVE Conference at Biola University in southern California. During the the prayer time, Pastor Shari prayed for people moving into the area. (We moved to West Seattle on the 4th of July, so we appreciated the prayer for us.) But the "going" that was on the mind of most in the congregation that morning (and when we returned for the evening service) was Pastor Shari’s, because this was her last Sunday. 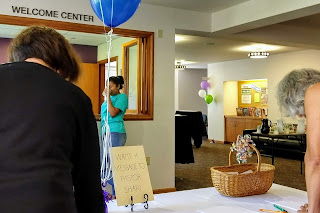 Shari Jackson Monson has been serving as the interim senior pastor at West Side Presbyterian Church for the last two years, but now she’s leaving to serve another Presbyterian Church in the area -- again as an interim. West Side will have a “Bridge pastor” until they’re able to call a new Senior Pastor. I’m not sure how a Bridge pastor differs from a interim pastor, but there you go. 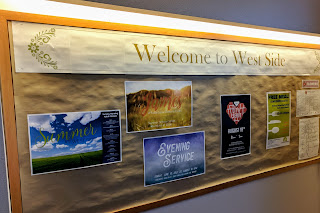 We knew that this was Pastor Shari’s last Sunday before we came, because Mindy had visited the church’s website. She was impressed with how user friendly and informative it was (she particularly liked that the week’s announcements -- this week’s, not last week’s -- were already posted on Saturday).* 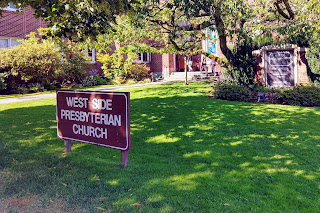 Parking is generally at a premium at churches and other businesses in Seattle, so we parked a couple of blocks away. As we walked toward the church, we agreed it looked like a Presbyterian church. It is an attractive brick building with a nice old tree in front (signs asked us not to climb it. We appreciated the warning, because we are often tempted to climb trees). 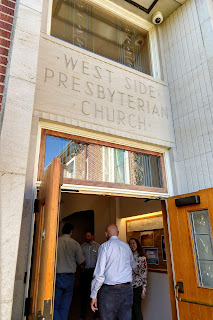 A line of people stood at the door to greet those entering. A table on our left was set up set up for people to write notes of appreciation to Pastor Shari. Two women behind the welcome center behind the table greeted us, and we chatted with them before going into the sanctuary.

We found our seats on pews near the back, and I noticed a couple of screens in the front that partially covered the carved wood decorations on either side of the platform. Otherwise, the sanctuary seemed typical of a Presbyterian church built in the late 1940s (1948 according to the cornerstone). 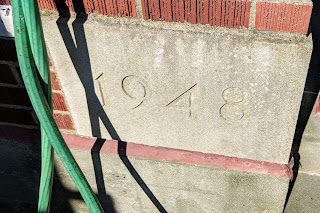 Though the message on the screens read, “no signal” at first, that was soon remedied. When the first song was announced, I was surprised it wasn’t projected, but rather found in the hymnal. Frankly, it’s been quite a long time since we sang all the verses in a song from a hymnal accompanied by an organ. 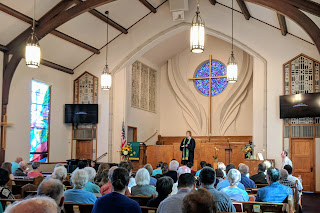 During the greeting/passing of the peace, one of the women sitting behind me said, “I know you’re a visitor.” I wondered how she could tell. I don’t think it was how I was dressed, although I saw older men in coats and ties and younger men in jeans. 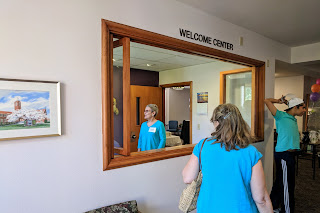 The high schoolers reporting on their conference (and the adults who’d accompanied them) wore blue t-shirts. In both the morning and evening services, students shared “messages of hope” from their experience. One young woman talked about singing praise songs with 1600 other students, many who raised their hands as they sang. She said that as a Presbyterian, she wasn’t used to that style of worship, but that the group from West Side soon felt comfortable joining in. 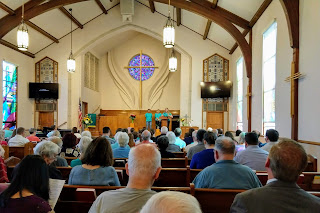 Prior to leading the prayers of the people, Pastor Shari said that on this, her last Sunday, she felt free to confess something. On a Sunday early in her time at West Side, she’d realized she didn’t have a pen or paper to write down the prayer requests that were shared. Thinking quickly, after each request was shared, she asked if another congregant would pray for that request. With her conscience clear, she asked the congregation to do the same thing on this Sunday. As a visitor and stranger, I appreciated being able to share a request anonymously and to know that others are also bringing our request to God. 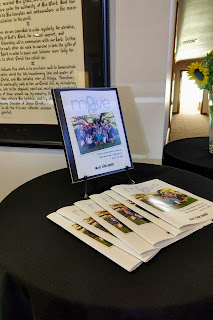 Pastor Shari said that, as usual, the prayer time would conclude with the Lord’s Prayer and that there were differences in the way people learned that prayer. She said that you couldn’t make a mistake, just pray. (I think I noticed that evening that Pastor Shari began to say “forgive us our trespasses” instead of the traditional Presbyterian “forgive us our debts.” But as she said, it’s all good.) 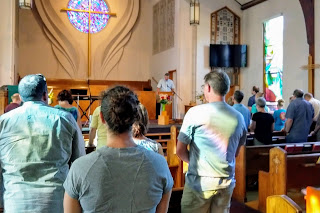 The morning’s speaker, Jeff Vancil, used to serve with Young Life but is now part of Leadership Development, an organization that runs Prayer Breakfasts. I hadn’t known, until he told us, that the Prayer Breakfast movement had its roots in Seattle when Abraham Vereide (who worked with the poor during the Great Depression) was approached by a rich man. “You do good work with the down and out, have you ever thought of helping the up and out?” 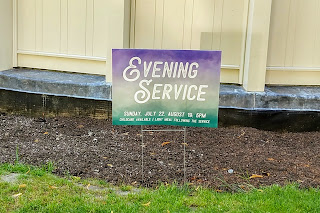 Eventually this movement led to the National Prayer Breakfast, which began in the administration of President Dwight Eisenhower. Other than the State of the Union Address, the National Prayer Breakfast is the largest gathering of elected officials in Washington, D. C. Jeff facilitates such events in Olympia, Washington state’s capital. He said that elected officials from both sides of the aisle leave politics aside as they come together to pray, leading to greater civility in the capital in these uncivil times. 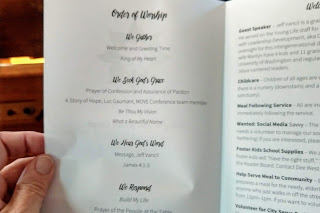 After introducing himself, he spoke on James 4: 1 - 3 (the church has a summer series on the epistle of James). He talked about the great incivility in this culture, and argued that James pointed to the need to acknowledge that we must look to ourselves as the base of such problems, not others. At the conclusion, a woman behind us said, “Wow, what a message!” 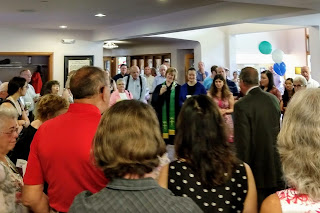 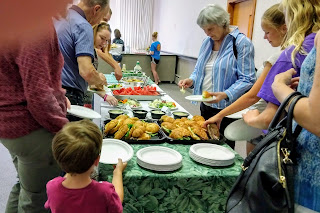 *As we mentioned last week, this blog is, like West Side Presbyterian, in a transitional stage because we are in a transitional stage. We plan to keep visiting new churches for the blog, but we’re also trying to find a church we can call home. We’ll try not to make our search the focus of posts, but it’s bound to come up now and then. 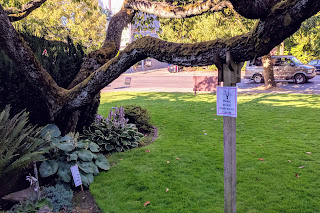