We go to three churches at the same time 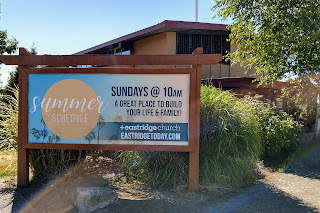 Eastridge Church, Seattle, Washington
For most of the almost four years we’ve been blogging about churches, we’ve been one-time visitors -- and visitors only. We’ve mostly gone to churches with no intention of returning on a regular basis. We started slowly in 2014 by visiting just a few local churches near our home in Sonoma County, California. In 2015, we visited churches throughout California (by theme, as some of you may recall). We spent 2016 traveling from state to state, visiting at least one church in each. When that trip was over, we moved to Fresno, California, early in 2017. We felt we already had a home church  at The Bridge, though we still visited other churches most weeks. 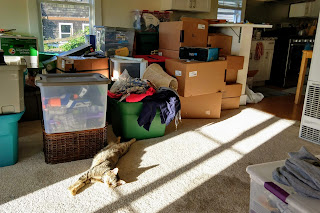 Over the past month, life has changed for us. Last week, we moved to Seattle, Washington, and we’re looking for a new church home. When we visit churches now, we’ll usually be thinking, is this where we want to stay? Even if we find the perfect (for us) church in the next few weeks, we plan to keep visiting churches through the end of this year. But we need a home base. If you’re a praying person, please pray for our search for a church home. 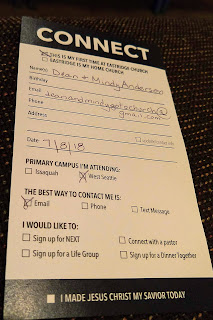 Don’t expect these posts to change a lot, though. We don’t expect to announce either, “Eureka! We’ve found our church!” or “Yuck! We won’t be be coming back here!” This blog is about first visits, and we always want to be kind. If we don’t want to return to a church, it wouldn’t be kind to announce it to the world, and if we really like a church on a first visit, we’re unlikely to decide to stay until we’ve visited several times --- and we don’t plan to write about those visits. 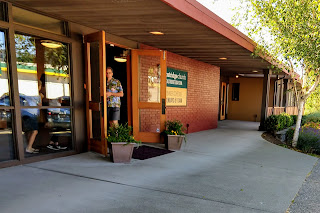 So enough preliminares. This week we visited the West Seattle campus of Eastridge Church, a multi-site church. The much larger Eastridge campus is in Issaquah (about a half an hour’s drive away). The church’s third campus is in Addis, Ethiopia (yup, the one in Africa). We were delighted that we’d visited on a Sunday when we got to hear a lot about that third campus. 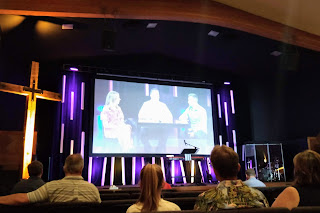 The teaching time, televised from the Issaquah campus, was Pastor Steve Jamison’s interview of Doug and Tasha Myers (who lead the Addis congregation). Doug and Steve have a long relationship. 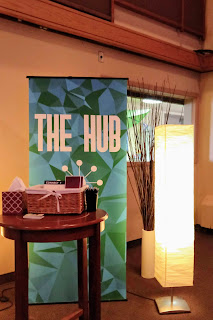 When Doug was 12 years old, he felt the call to missions while listening to one of Jamison’s sermons. Years later, Doug went on to work as a youth pastor under Jamison. During that time, the church leadership asked Doug where he thought he should be, and he said Africa. They asked what was keeping him from Africa and he said school debts. So the church made a commitment to pay off those debts.

Doug and Tasha have served years in Africa. As missionaries with the Assemblies of God, at first they followed traditional methods of ministering in rural areas. The emphasis had been on training local pastors for ministry, all in native languages, but they had a vision for a different kind of ministry. 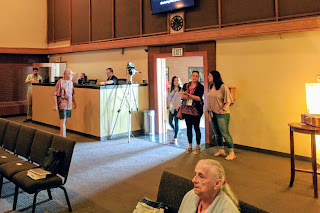 Addis, Ethiopia is the headquarters for the African Union, a 55-nation organization that deals with economic issues, treaties, health concerns, etc. Representatives from all over the world, from the Americas, Europe, and Asia, to work with the Union, and the official working language for the African Union is English. So Doug and Tasha have begun an English language international congregation in Addis. The ministry is growing, so Pastor Jamison challenged the two congregations to raise $50,000 for the congregation in Addis. 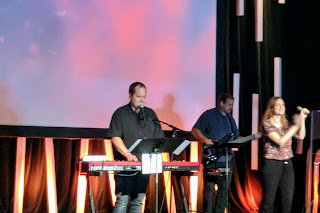 We enjoyed worshipping with the people of the West Seattle campus. During the singing time, people were encouraged to come forward with prayer requests, for physical healing, work, financial needs, decision making. 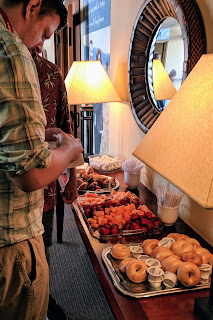 After announcements, people were encouraged to chat over coffee, strawberries, melons, bagels, donuts and other treats before returning to the sanctuary for the message. John introduced himself, though he was a visitor as well. He is here from India to visit his daughter.

I met Andy and asked him why he attended this church. He said his wife wanted to go to a community church. I asked how long he’d been attending there, and he nodded at his daughter, who was 12, and said they’d been attending since she was little. 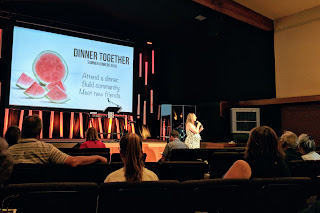 After the service ended, we were able to spend a little more time chatting with people. Mindy chatted with Heather, who’s Pastor Jamison’s executive assistant, while I talked with her husband, Brian. I asked what he liked about the church. 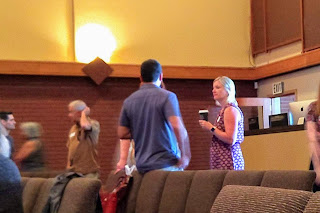 He noted that the West Seattle campus had the advantages of a small church, so you can get to know people. (Craig, the campus pastor, said during the service, “It’s good to have a critical mass in the room.”) Brian said they also benefit from the large campus in Issaquah. (For instance, the kids from West Seattle will be bussed over to the Issaquah campus to share their Vacation Bible School.) 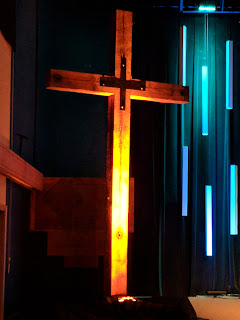 We loved being in one place, West Seattle, and yet feeling a part of the church a half hour and half a world away. That's how the Church Universal works.
Posted by churchandstates