We walk into a church and a street fair 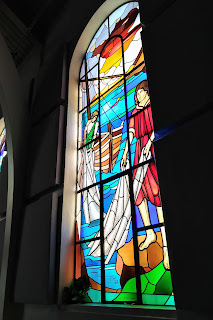 The Junction Church, Seattle, Washington
This week our daughter Paige suggested we might want to listen to the latest episode of This American Life, which had a story on church planting. Watson Jones and A.J. Smith were trying to launch an urban church in Philadelphia. The story makes it clear that there are big challenges in starting a church these days. But there are also big challenges in maintaining an older church as well. 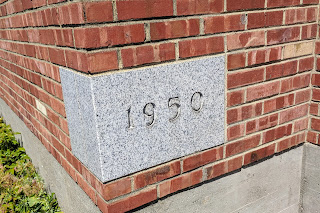 Outside The Junction Church’s building, you can see a cornerstone with the year the building went up, 1950. Inside, we heard that the church (not just the building) began either in 1904 or the late 1800’s. Whatever the exact year was, those dates aren’t too far from each other. It’s an American Baptist congregation, and we learned that in years past the sanctuary was filled with pews and, on Sunday mornings, a couple hundred people. When we entered the church at 10:00 am this past Sunday, barely on time for the start of the service, there were no pews and fewer than a dozen people, including ourselves. 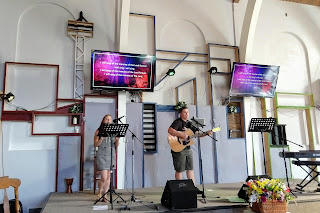 Gil introduced himself and mentioned that he was the pastor of the church. We told him we were from California, and he told us about living in Hayward. He has been attending the church for four years, but two years ago the pastor left, and Gil “stepped up” (according to Rob, another congregant) to the role of pastor. 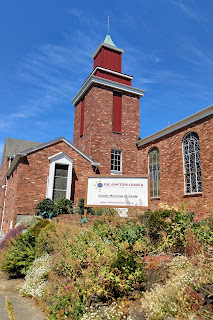 A young man and woman, Chris and Jessie, led the singing time that opened the worship service. There were older choruses, such as “I Will Sing of the Mercies of the Lord,” which was fun, along with a couple of more recent offerings. The slides kept up with the choruses, which doesn’t always happen. After church, Mindy and I agreed that we enjoyed the singing time, simple as it was, more than we appreciated the music in various larger churches we’ve visited. 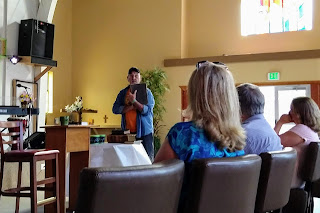 Gil spoke on Proverbs 22:6, “Train up a child in the way he should go: and when he is old, he will not depart from it.” He used photos throughout the service, starting with cheerleaders in their eighties, illustrating the “old” part of the verse well. Another slide was of those great theologians, the Three Stooges. Finishing up, Gil talked about the history of the church as he held up hundred year old Bibles, and he talked about the need for the church to reach out to the community. 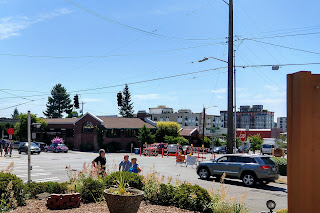 Usually, he said, they have communion every Sunday using bread and wine (not juice? We weren’t clear on it) made by members of the congregation. Not this Sunday, though. Gil encouraged people to go out into the community to West Seattle Summer Fest, a street fair held literally at the church’s doorstep. So we all took a walk. 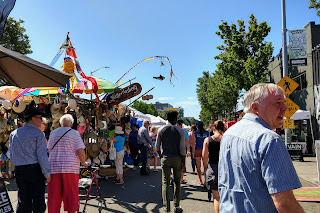 We walked up and down the street with Rob and Susan, who are regulars at the church. They have three grown kids, as do we, so we talked about that. We heard some of their history and shared some of ours. We smelled some great food and had some samples. We saw some clever crafts. And I learned about the proposed subway system that might someday go from West Seattle to Downtown. When we got back to the church, Rob opened the door (he had a key), and we went inside and chatted a bit before heading home. 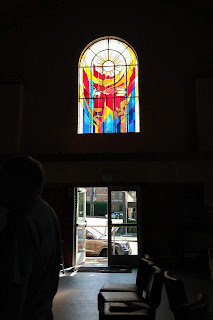 Earlier, during the worship service, we saw people inside the church wave to people walking by outside. And the church will continue to get more of those outside people in. It’s something God can do.
Posted by churchandstates