We go to a hallowed place 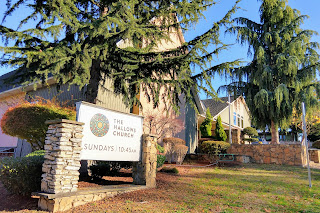 The Hallows Church (West Seattle), Seattle, Washington
A little over five years ago, Mindy and I were visiting our daughter, Paige, who had a summer internship in Seattle. We’d just started visiting churches, (we hadn’t started writing about them yet), and we visited a church here -- Mars Hill. At that time, Mars Hill was a thriving, multi-campus ministry, and we were very impressed. The congregation we visited met in an old church building, and the service was filled with young people. The worship team was wonderful, doing old hymns in new arrangements (loudly), and the speaker happened to be one of my beloved professors from seminary. We all loved our visit that morning. 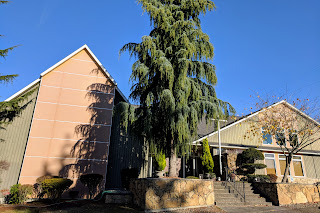 Not long after that visit, the church fell apart (it wasn’t our fault) There was scandal, not about money or sex, but rather bullying and intimidation. Even though we'd just visited once, we were sad about the whole thing. 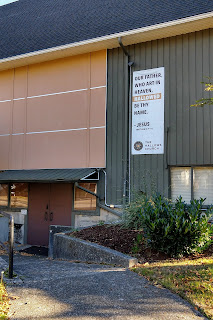 I was thinking about this former church because it was mentioned a couple of times in our visit to the West Seattle expression of The Hallows Church; obliquely in the sermon and directly in a conversation after the service.

Mindy had noticed the church soon after our move to West Seattle in July. “The Hallows” is an interesting name, explained by a banner outside featuring the Lord’s Prayer (“Hallowed be Thy name”). We arrived a few minutes before the 10:45 Sunday morning worship service and were greeted warmly by several women just inside the door. 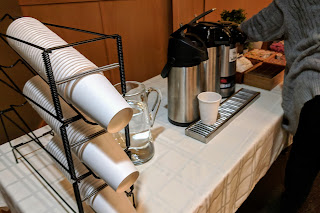 Mindy headed for the coffee in the back of the sanctuary where a man named John introduced himself. We asked when he had begun attending the church, and he told us he came in the summer when his previous church, Living Hope, closed down. We said we’d met other people from Living Hope when we visited All Souls Church, and he said most people from that PCA (Presbyterian Church of America) had gone to either of these two churches. 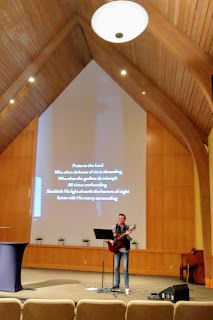 James, the sole song leader, opened the service, “If you could stand up, we’ll pray, and be off on our merry way.” With his guitar he led a blend of hymns and choruses.

“My name is Andrew, and I serve as one of the pastors here,” Pastor Andrew said as he introduced the announcements. Guests were encouraged to fill out the connection cards and put them in a box in the back of the church (along with tithes and offerings). He also spotlighted areas of need, such as people for the prayer team. He also announced that all three “Expressions” of The Hallows would be meeting on November 28th for congregational prayer. (Besides the congregation in West Seattle, there are also North and Fremont Expressions of The Hallows.) He then dismissed the “little disciples” to Sunday School. He took time to pray for the church (“let us grow into a humble people”). 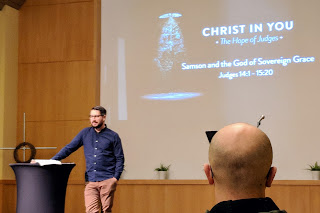 Before the sermon, there was a quiet time where people could read Scripture and quotes from Christian leaders (such as Martin Luther) projected on the wall at the front. The main text of the morning came from Judges (the church is working through the book), chapter 14:1 through 15:20. This passage is the beginning of the story of Samson. 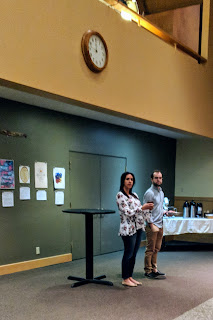 Andrew said that we might expect Samson to be an admirable character. After all, he was a special gift to barren parents, set apart as a Nazirite from birth (as John the Baptist also was). God promised to use him greatly. And he’s featured in the Bible and all. Andrew pointed out there is a disconnect between those expectations and his actual character. In the stories we looked at, Samson is impulsive, more sensual than spiritual. He is irreverent; eating honey from a lion’s corpse (yeah, weird, read the story) which is a clear violation of the Old Testament dietary laws and his Nazirite vows. He is manipulative and… well… just a jerk.

And yet God, through His grace, used Samson to accomplish His purposes.

Part of the sermon’s point was that giftedness is not a sign of godliness. “In Seattle, we’ve had people that were gifted but not godly, and because of that, people in this area are still hurting.” It’s not much of a stretch to see this as a critique of the leadership of Mars Hill. 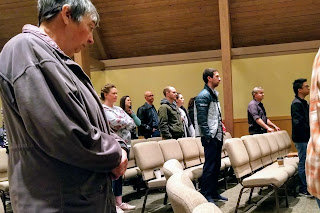 After the sermon, Andrew invited us all to the Communion table, “We’ll be worshiping through communion. The table is open. Go at your own pace.” A man at the back of the sanctuary held gluten-free crackers, and a woman held a cup of juice to dip the crackers in. 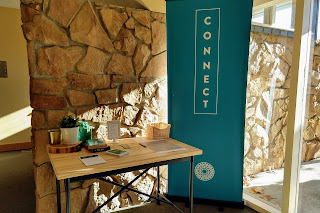 After the service, we had the chance to chat with a couple of people. Ronda, who’d greeted us at the door, used to attend Mars Hill, and that church had shepherded her through a difficult time. When that church folded, she told us, “I was broken.”

She visited church after church but didn’t find anything like what she had before. She visited The Hallows, and at that time there were only about a dozen people attending. She was frustrated and talked to one of her old pastors at Mars Hill who told her, “You’re going for the wrong reasons. Where can you serve and where you can grow in the grace of Christ?” With that, she knew where she should be. 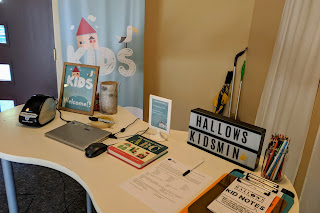 She went back to The Hallows (which has grown a lot since that time, though the West Seattle expression isn’t a large church). She said, “Andrew is an amazing pastor.” We asked about the strengths of the church, and she talked about it being Bible centered, humble, and involved in the local community.

We also talked to Andrew, who started the groundwork for the church in 2014. They began to meet in 2015. He talked about the church’s focus on Scripture and service, and that Gospel clarity includes telling people the Gospel is not just for the future but for right now. Humility came up again, which obviously is a high value in the teachings of Jesus. “Multiplication is in the DNA of the church,” Andrew added as he described The Hallows’ reasons for existing in (so far) three neighborhood expressions. 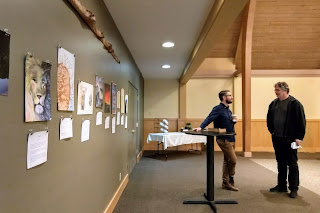 He talked about the “missional communities” which might be called “small groups” in other churches. These ministries have three parts: love of God expressed through Bible study, love of church expressed through fellowship, and love for neighbors expressed through service. Each group varies its activities throughout the month to demonstrate these three values.

But we had been occupying Andrew’s time (almost everyone was already out the door, though people had lingered to chat after the worship service ended) so we finally let him go. 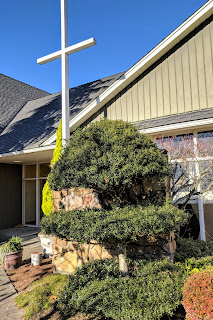 Though one of the purposes of this blog is to celebrate the work God does through His church, we must be honest in acknowledging that people are also hurt by the church. The Hallows, among many other good things, is caring for some people who have known that pain. They are doing the good work of hallowing God’s name and bring His Kingdom to earth.
Posted by churchandstates