We go to church on an island 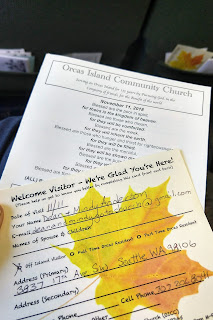 When Jesus was asked, “Who is my neighbor?” He told the story of the Good Samaritan. Churches need to ask that question in an another way. Perhaps I should churches should ask the question in an additional way. They need to ask it in a practical way. Though a church should care for everyone, even the whole world, a church needs to focus resources on a specific community.

For example, a church located here in Seattle probably shouldn’t send out 700,000 flyers to the whole city when they put on a Vacation Bible School. They need to figure out who their neighbors are, who they can reach with their available resources. 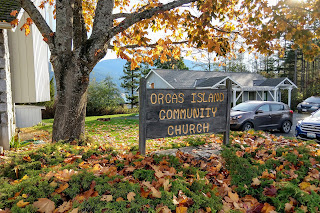 The answers to such questions might be a little easier to figure out in small, isolated towns that are like islands. And, of course, there are literal islands. Like Orcas Island. 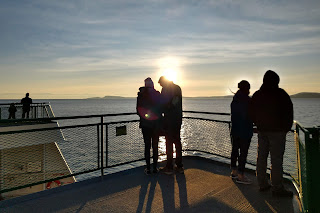 Last weekend we went to visit Mindy’s brother Hank and sister-in-law Hilary on Orcas Island. We walked onto the ferry, leaving our van behind, because Hilary had offered us a ride -- and let us use her car on Sunday morning to go to Orcas Island Community Church. 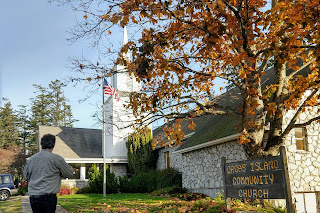 Edie greeted us as we came in the door for the 10:00 am service. It was hard to find a seat. We’ve been to plenty of churches that have open seats minutes before the service, but fill up after the service begins. There were prompt congregants here. We found seats toward the back and side, and we had time to notice that the walls were decorated with patchwork quilts (I assume made by folks in the church). Church bells rang, and the service began. 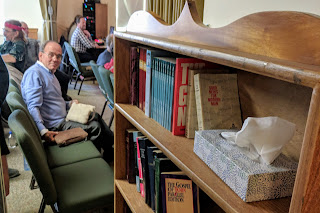 It was time to worship (and we did sing “Come, Now is the Time to Worship”). Pastor Brian sent children off to Christmas program rehearsal. (Later other kids were sent off to Sunday School, so I guess not all kids are going to be shepherds, sheep, and/or Magi.) People were encouraged to bring in their Operation Christmas Child boxes the next Sunday. There was an announcement for the upcoming Thanksgiving service, with all the island’s churches gathering together at Orcas Island Community Church. The church is hosting a Thanksgiving dinner as well. 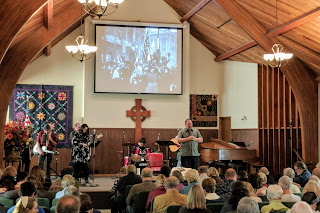 There was an announcement for an event that would take place during the service. “Some people will be leaving for a special service somewhere else on the island.” The American Legion Post was holding a Veteran’s Day commemoration at 11:11. Pastor Brian noted that this day was the hundredth anniversary of the end of World War I, and he said we “look forward to the day when all wars will cease.” On the screen there were photographs of that first international armistice. 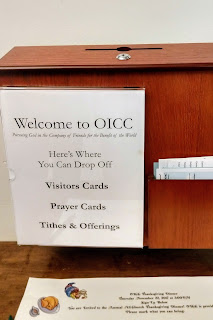 To honor the veterans, Pastor Brian asked them to stand as their conflict was mentioned. For World War II, two men stood. Then the Korean War, engagements during the Cold War, the Vietnam War, and finally wars in the Persian Gulf and Afghanistan. Photographs of Veterans Day celebrations, beginning with the first as World War I ended, played on the screens at the front, and Pastor Brian said, “We honor those who have followed the call to serve something beyond themselves, in this age of narcissism.” 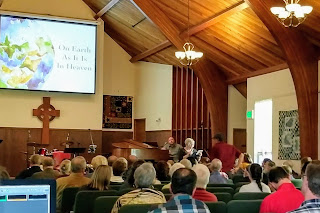 After a time of quiet reflection and prayer, people were invited to raise a hand and share a prayer request or update. One woman shared, “I have a new grand niece and by the end of the service I’ll have pictures. Not that I’ll be looking at my phone during the service!” 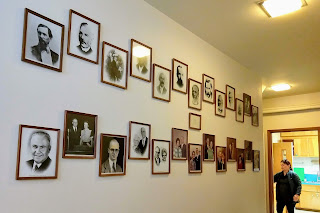 Pastor Brian acknowledged the local cross country team that went to state finals (“Jaydon, one of the fastest runners in the state”) and the soccer team that advanced to semifinals (“Good job, Levi!”) 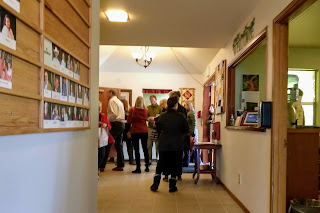 A woman named Sue said, “I can’t even count the miracles that allowed me to be here today,” leading to cheers and applause from the congregation. Pastor Brian led in prayer, taking time to pray for those threatened by the fires in California and those who have already lost much. 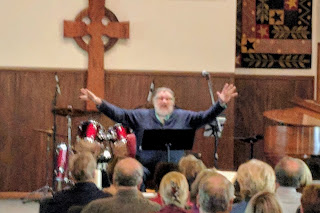 Dick Staub, the church’s preaching pastor, gave the sermon. He preaches every fourth Sunday, and he explained that he was sitting down to speak because “Rabbis sat down to teach. You may think I’m sitting because of neurological problems, it’s because I have something really important to say.” 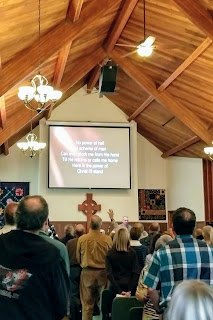 His message that day was titled, “Deliver Us From the Evil One,” with Matthew 6: 5 - 15 as the text. “This morning we’ll be talking about the Evil One, or as Nigel calls him, Mr. Nasty.” (He mentioned Nigel many times through the service. Nigel is a real person, part of a group of faithful creatives called The Kindlings.) Pastor Staub said he first preached about Satan in a sermon titled “The Devil Made Me Do It” back in 1972 at New England’s first drive-in church. He said the devil always attacks when you preach about him; for instance, Pastor Staub brought the wrong version of the sermon that morning.

During the sermon he talked about the mission of Orcas Island Community Church. “We have a mission statement that everyone on the Island will learn of God’s love through word or deed in a language they’ll understand.” 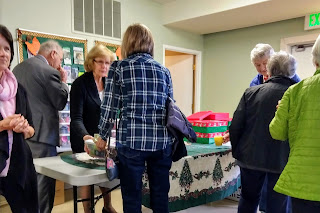 As I mentioned before, a church on an island is more easily able to define their scope of ministry. And this church looks for a variety of ways to reach out on the community. The day before, after the island’s Hops Fest, a couple of people from the church offered rides home in the church van. 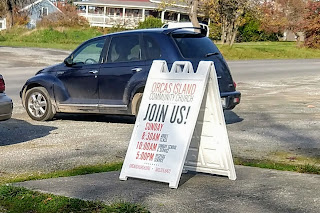 From what we could see, the church seems to be doing a good job of loving their neighbors on Orcas Island. Even visiting neighbors from the mainland -- like us. 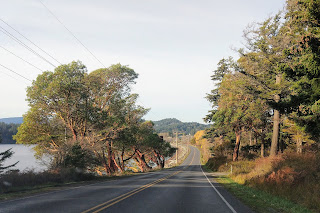 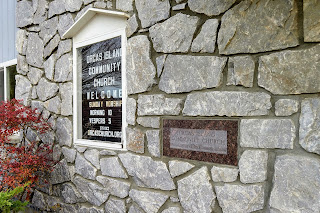 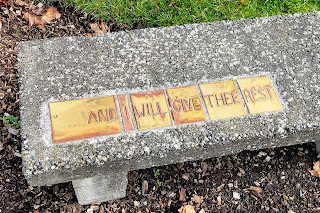