We go to church...er, churchome. 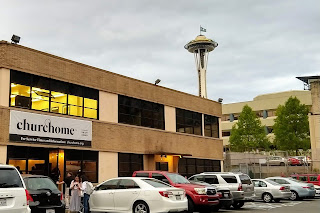 Churchome, Seattle (Downtown or possibly Belltown), Washington
Robert offered me the seat next to him. I thanked him, but pointed to Mindy in the row ahead and said I was sitting with her. It was greeting time during the beginning of the worship service at Churchome in downtown Seattle. His offer was a little thing, but I appreciated it. 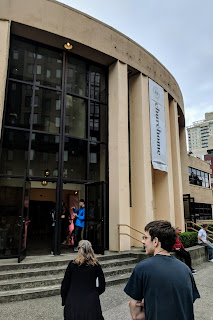 For nearly four years, Mindy and I have been professional church visitors. (Not “professional” meaning getting paid for it, but in the sense of commitment. We’ve been visiting churches and ministries most weeks since August of 2014, and writing about it since November of that year.) Almost every Sunday, we’ve walked into a new place and seen all new faces. Sometimes people acknowledge us and sometimes they don’t. It’s worth noting when people do a good job of greeting visitors, and Churchome did a very good job, with me especially. 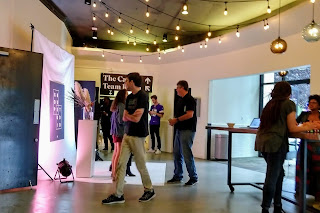 We visited on a Sunday evening and found (free!) parking just around the corner. As we approached the building, I noticed people smoking outside, which is something I’m happy to see. I’m not advocating the use of tobacco or tobacco products here -- the surgeon general is right about these things -- but seeing smokers outside tells me that people here aren’t afraid of being judged for smoking. (There are certainly plenty of places where this would be the case.) 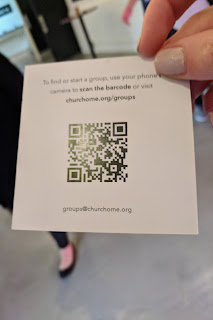 The first thing I noticed in the lobby was a set-up for what looked like a photo shoot. I found out it was part of the church’s promotion for small group ministries. I told Carley, one of the women hosting the station, about our project of visiting churches, and we talked about what she liked about Churchome. She said, “The community; it’s easy to become a part of things.” 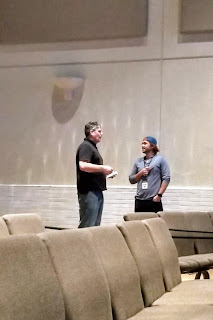 I went inside the sanctuary to take some pictures. After a bit, I just stood in the back, observing. Kellon, whose name tag identified him as a church greeter, came over. I told him we were first-time visitors and why we were visiting. He said he always looks for people who are alone (as I appeared to be) to say “Hello.” That night he’d gone to chat with a man sitting alone and found out the man had just graduated from the Salvation Army’s rehabilitation program. They had a good, ten-minute talk. 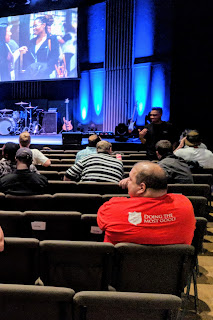 As the service began, a woman welcomed everyone and introduced the pastor, Judah Smith, who was giving the evening message via tape. Which is why the evening crowd was greeted with “Good morning, church! It’s a big day; it’s game day. That’s why everyone came to the 10:30 service. Everyone’s welcome unless you don’t cheer for the Seahawks.” (The home team cheering even continued in the pastoral prayer asking for God to “Be with the young men in green and blue in Colorado”. Which sounded odd -- the game was over, and the Seahawks had already lost to the Broncos.) 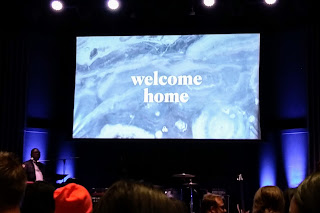 Churchome is a multi-campus congregation, with four locations in the area (including Bothell, Kirkland and the University District), and one in Los Angeles.

The message came from Matthew 10 (which was interesting because that had been the text the week before at Elim Baptist). That’s the passage where Jesus said, “I didn’t come to bring peace but a sword.” Judah Smith said it was one of the most challenging passages he’s ever preached. 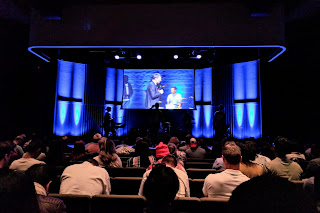 Judah talked about our need to put Jesus above everything. Bringing in the story of Mary and Martha, he said one of our problems in the church is “doing things for God while we are thinking of ourselves… Do you know why you think God owes you? Because you’re doing things for God while thinking about yourself. This is why weird things happen in the church: gossip, backstabbing, infighting.” If we put Jesus first, other things fall in line. 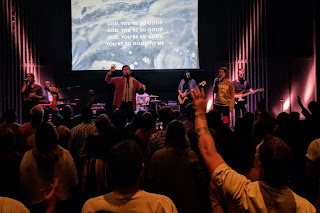 After the message, the worship team led singing -- the opposite order from most services we’ve attended where the sermon comes tends to come as the concluding part. At the conclusion of the service we were told, “Thank you for finding parking or Ubering; how ever you got here. Thank you for taking part of your Sunday for us...You belong here. In a world of a lot of bad news, we are here to tell you about the love of Jesus.” 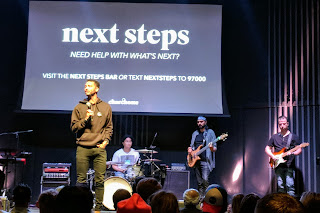 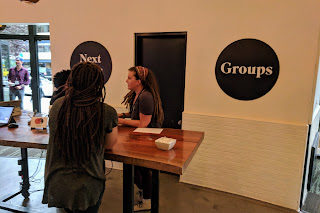 People were encouraged to also check out the small groups station in the lobby, “Because at Churchome, we don’t just do Sundays together, we live life together.” 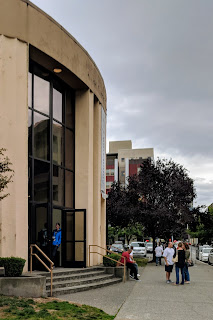 People truly made an effort to make us feel at home at Churchome, and I’m pretty sure they would have done so even if they’d known we were 49ers fans. Pretty sure.
Posted by churchandstates