We go to a small church 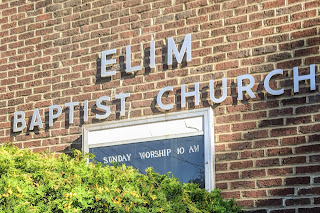 Last week, I wrote about a guy who said what he liked about his church was that it was big. This week I asked a woman named Sheryl what she liked about Elim Baptist, and she said, “It’s a quirky, small, wonderful, little church.” So half of her adjectives referred to the petite nature of the place. 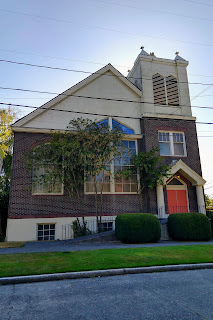 Finding big churches to write about is easier than finding small churches. When we google churches in Seattle, all the big churches come up first because that’s how algorithms work. (I guess. I actually have no idea how search engine algorithms work.) So maybe you’re wondering how we came upon Elim Baptist Church, whose online presence is surprisingly minimal.

When I was in seminary, I needed to do an internship at a church as part of my pastoral training. I ended up at Fullerton Evangelical Free Church in Southern California, where Chuck Swindoll was lead pastor. Paul Sailhamer was in charge of the intern program, and Elim is pastored by Paul’s wife’s sister’s husband, Mick Berberian. So we heard about the church through Paul (still one of the people in ministry I respect most highly). And Paul respects Mick and his ministry. 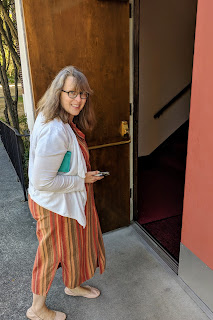 Elim Baptist is in the Wallingford neighborhood of Seattle, on the north shore of Lake Union. We arrived a little early, so we took a walk around the neighborhood. The church is surrounded by homes, with a large city park down the street. It’s not a commercial district. As in many parts of Seattle, parking is at a premium, so the streets were lined with cars, but we couldn’t tell if they belonged to people who were already in the church building.

The service was scheduled to begin at 10:00 am, so Mindy decided to try the front door a few minutes before. It opened, and we could see a dozen or so folks already in the sanctuary. 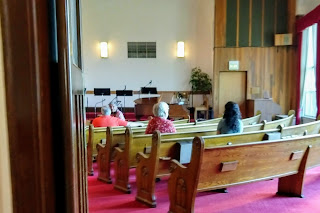 We sat down in the back row. In the row ahead of us, a couple of women were discussing the end of summer change in the service time. The next week, worship would begin at 11:00 am. One of the women preferred the earlier time. “Get it done, and you have the rest of the day.” 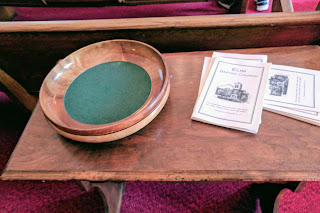 Sheryl was one of the women, and she introduced herself. We also met Marvic (short for “Mary Victoria”) who expressed appreciation for this church as a neighborhood church. Another woman came in asked her, “Are you doing music?” 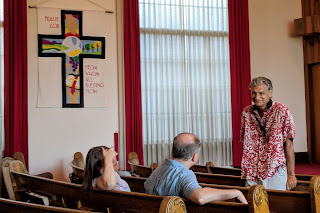 Mick was in front (I recognized him from a photo on Facebook), so I went up to introduce myself. He’s been at Elim since 1983; before that he was involved in larger ministries. This isn’t a church with a lot of programs, Mick said, “Their faith is expressed outside of the church. We see a lot of life come through this church.” 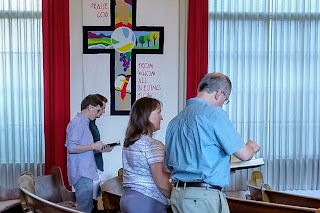 The service started a little late, nearing ten after ten. The church doesn’t have a countdown clock like University Presbyterian and a lot of other big churches have. We used hymnals for the opening song (“Morning is Broken”), and then the children were released to Sunday School. For most of the service, we could hear a baby being cheerful, which was a nice thing. 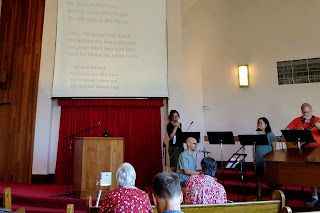 We sang several choruses, and they were oldies (“Above All,” “Lord I Lift Your Name On High,” “Seek Ye First,” and “He Knows My Name”), covering each of the decades from the seventies to the aughts.) A screen and an overhead projector were used for the lyrics. (I remember many heated discussions at other churches back in the day about whether the screen should be allowed to cover the cross.) Mick accompanied the choruses on his saxophone. 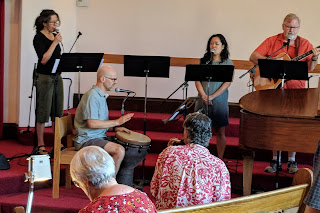 The screen was raised to reveal the three crosses, and Mick came forward to preach. “This morning we have arrived at Matthew 10 and maybe chapter 11,” he said. He referred often to the Greek word choices in the Gospel, but also said, “Verse 34 is a bummer.” (Maybe it’s just me, but the slang seemed to work especially well with Mick’s Hawaiian shirt.) 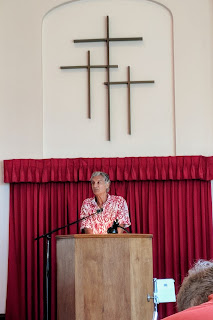 People in the congregation obviously knew and loved each other. They love their pastor and he loves them. This can happen in a unique way in a small neighborhood church. Churches -- small, big and in-between -- God can use them all. 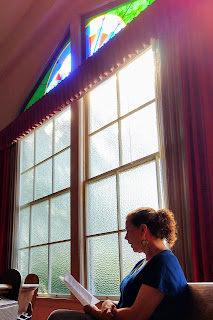