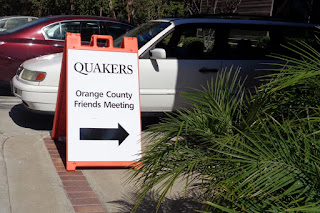 I've noticed many churches have a problem with silence. A pastor will say they'll take a minute for silent prayer, and then the silence won't last the full sixty seconds. One time in a church, the preacher went to the pulpit and said nothing for two minutes. (Okay, it was me.)  I watched people look at their watches, shift in their seats, and look at one another puzzled. I listened to people cough and whisper to one another.

Psalm 46:10 says, "Be still and know that I am God."  I worry sometimes that if we can't manage being still, how well are we going to manage at deity recognition?

Quakers know how to be quiet for more than two minutes. 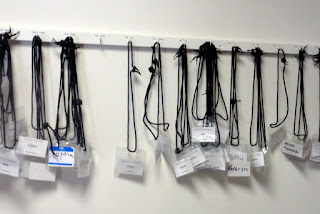 We went with a friend to a Friends Church. My wife, Mindy, has known Brad since she was 11 years old, both attending Southport Presbyterian Church. I met Brad when we were both attending Trinity Evangelical Divinity School. Brad recently moved to Southern California to teach at Fullerton State, and we asked if we could join him for worship at the Orange County Friends Meeting. 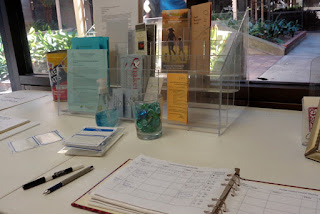 We got off to a late start -- the service started at 10:30, and we arrived 10:40, but I thought we were okay. The meeting takes place in an office complex. We went in the front door, into a little room where eight people waited to join the others in silent worship. We introduced ourselves and talked a bit about the church. Their group had been meeting in Orange County for fifty years. Previously, they've met at a nursery school, a convalescent home, and a law school. For the last seven years they've rented this office space and were relieved not to have to haul chairs every Sunday. 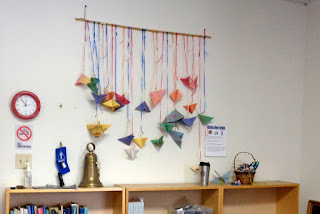 Soon a door opened, everyone stood up, and we started down a hallway. I learned later that the meeting had already begun, but we were waiting for the break when the children exited and went to religious education. We entered the meeting, already in progress. Chairs were arranged in a semi-circle and we found our place. We had been warned that the air-conditioning was down but a couple of fans were blowing and I thought it was certainly comfortable enough. People were casually dressed, several in shorts and t-shirts, which is pretty typical for Southern Cal churches. I saw a keyboard in the corner of the room that certainly wasn't used that morning. 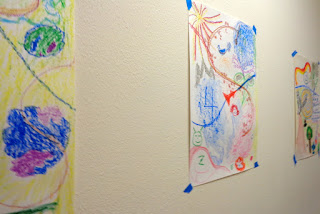 It was about quarter to eleven and everyone was quiet, saying nothing, as they remained for the next forty minutes or so. The sign on the wall asked people to turn off cell phones for quiet worship. I didn't hear a phone or even see one (quite unusual in American society). 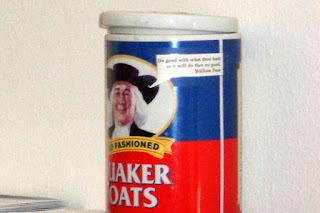 During the time I noticed some people with eyes open and some with eyes closed. (I admit to being a bit terrified that if I close my eyes, I'd fall asleep.) One woman was knitting, which Brad noted afterward was a fairly common thing, since Quaker tradition allows that handwork is acceptable as long as the mind is focused on worship. A couple of people had water bottles. I could hear the gulps when they were used. I noticed a man tapping his right foot for the first half of the service and his left foot in the second half of the service. I noticed a man cleaning his ear with the tip of his eyeglasses. 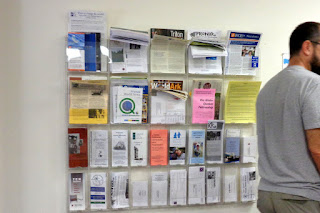 I didn't notice anyone else reading, but I opened my Bible and read some Psalms. Brad said there has been a bit of controversy in Quaker circles about whether it was okay to look at electronic devices during Meetings. He had thought about looking up something to share on his phone that morning but decided against it. Mindy heard somebody's alarm beep quietly at 11:00. 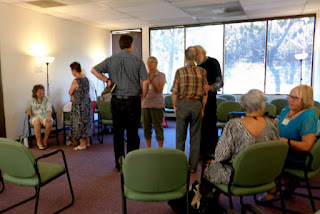 Shortly before 11:30, Brad stood to share a word. He talked about how he'd been challenged by something he'd read recently from a writings of British Quakers to order one's life under Christ and to be open to God's healing. After the service Brad asked us whether we thought what he said was appropriate. We truthfully assured him that we'd found his words encouraging. He told us that a Quaker is always told to consider and reconsider before sharing to avoid the promotion of ego. (As we were leaving, a "weighty" or wise older woman also expressed her appreciation for what Brad shared.)

I noticed that after Brad talked, some people took the opportunity softly cough the coughs they'd been holding back. 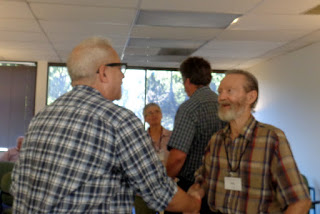 A woman stood. She said that in the religious education class prior to the Meeting, they'd been discussing Quaker history in Southern California. In the past Quakers in the area reached out to Japanese interns during World War II and were a witness for pacifism during the Vietnam War. She wondered what issues they would deal with in the future. 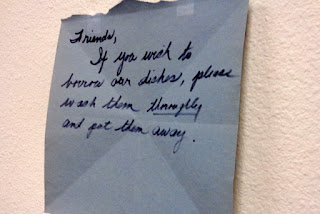 As the quiet time of worship ended, people shook hands with those around them, mostly remaining in their seats or standing in their places. It was then time for announcements. A woman stood and pointed out the air-conditioning was working again. ("You may have noticed the man yelling outside during Meeting. The AC guy may not be our style of person but he got the job done.") She noted the next weekend was Labor Day and asked if they perhaps could get together for a barbeque or pool party.

Announcements were made for a speaker from the Citizen's Climate Lobby and the Orange County Crop Hunger Walk. There were announcements for an upcoming summit on prisons and issues of peace and social concern. 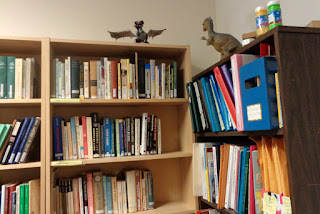 James stood up. He was an older gentleman who looked rather like the old timer who runs the country store in an old TV western. He said he had a story that might be of interest, and he would share it with anyone that wanted to stay after the meeting. A woman stood and said she also had something to share, if people would care to join her outside after the meeting. 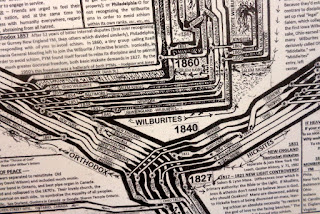 Though Brad had attended this meeting before, it had been a while, and he was asked to introduce himself. We introduced ourselves. At the close of the meeting everyone was invited to snack time. People were quite friendly during the social time, because, of course, "friends" are what they're called -- though we did notice a chart on the wall that showed the schisms in the Quaker movement through the years and there had been quite a few.

Service Length: 1 hour 10 minutes (probably)
Sermon Length: no sermon. Quiet time after we sat down was about 45 minutes, and there had been about 15 minutes of quiet before we came in.
Visitor Treatment: While we were waiting to enter the meeting, we got name tags and introduced ourselves to the others waiting. We were asked to introduce ourselves during the announcement time. In the entrance room, we signed the guest book, and during the fellowship time after worship, a woman from the Meeting introduced herself to Mindy and made sure we had the information about Quakers and the Orange County Friends Meeting that we needed. 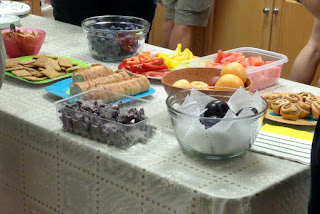 Followup by Tuesday Morning: none (but we didn't sign up for the newsletter, which is more of a very active email chain. Brad says he frequently gets updates from the Meeting)
Our Rough Count: 24
Probable Ushers' Count: 30
Snacks: coffee, hot water, water bottles, sparkling cider, star cookies, watermelon chunks, various crackers, veggie tray, plums and other fruit, bread, coffee cake
Musicians: none
Songs: none
Miles to place: 501
Total California Miles: 12,070 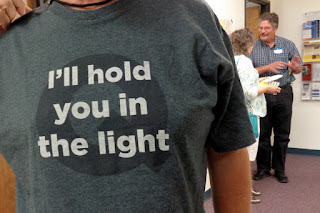