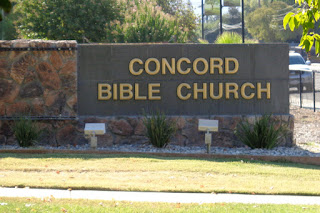 Free. Initially, they weren't thinking free, they were thinking a nominal charge, but Pastor Jeremy Cook felt God was telling them it should be free. 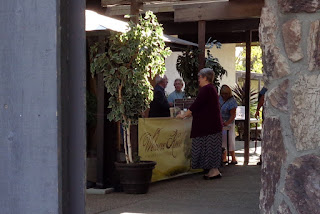 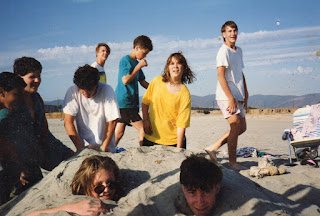 Five years ago Concord Bible Church wanted to do an eight week summer program for neighborhood children. The inspiration for the program was a desire to imitate the ministry of Jesus -- He responded to felt needs: giving sight to the blind, strength to the lame, food for the hungry, etc. CBC believed the people of the neighborhood needed child care in the summer, but after looking at church finances, it didn't look like something the church could do without charging for it. But Pastor Cook (or "Pastor Jer") believed God would provide. God did, of course. This ministry has proved of benefit to people of the community. And it has led to families being introduced to the Church.

I served as a youth pastor at Concord Bible Church a couple of decades ago. At that time the church was also serving children in the community. Mindy used to load up carloads (amazing how many kids a nine-seat station wagon will hold) of kids and take them to the church's weekly children's programs (and Vacation Bible School as well). Weekly children's ministry continues at CBC in many ways, including AWANA. 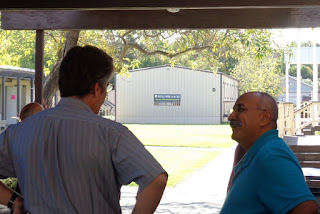 We noticed something else that's continuing: old friends who are still active in leading and serving the church Pastor Jeremy's was not one of those faces, though he's been at CBC for almost ten years. But Jean Peters was not there. Jean and her husband Rawley were pillars in the church for the four years we served there. Rawley passed away a few years ago, and Jean passed away unexpectedly a couple of days before we visited. Many folks were visibly shaken by the loss. Jeremy dedicated the morning's sermon to "Saint Jean". The sermon was about a worthy walk in Christ -- not a perfect walk, but a worthy walk. 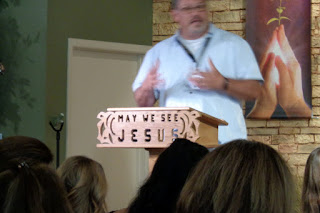 There are a number of other "worthy walkers" still there from back in the day. The "Egyptian contingent" continues to grow. Years ago (before our time!) a number of families and individuals from Egypt gathered to study the Bible together. Someone in the group (Philip and Magda Bedros?) discovered Concord Bible Church and invited others to come. The group still has Bible Study together regularly at the church (in Arabic). 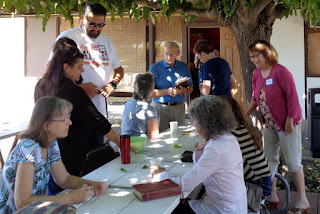 During the announcements Jeremy mentioned that he had been invited by the Evangelical Free Church (of which Concord Bible Church is a member) to be a speaker at a conference focused on multicultural ministry. I'm sure the Egyptian contingent were part of the reason he was invited, but not the whole reason. Looking around during the worship service, Mindy and I noticed a variety of ethnicities, reflecting the community. 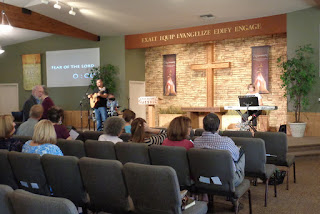 Along that theme, the time of prayer (focused on the loss of Jean Peters) was led by an Egyptian American, a European American, and a Mexican American, each in his own first language. 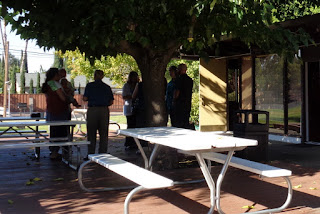 Something that was different from our time at CBC was the lack of children in the room. My memory is that kids were in the first part of the service and then dismissed to children's church. (Mindy was no help at all with this because she remembers always being in the nursery.) All the children this morning were in Sunday School for the entire time of worship.  This was only the second week of Sunday School after a summer break. There had been a longer break in Sunday School. Jeremy told us that for a time during his tenure he had to cut Sunday School classes because there weren't the kids there and the leadership was stretched. But they were back at a place where there were plenty of young families with young children and enough adult leadership to meet their needs.

Another project the church is working on, particularly for kids and youth, is building a sports center. In the bulletin,  a graphic showed a little hoop that almost, but not quite, had reached the backboard. I would assume the school that shares the property, Ygnacio Valley Christian School, would also benefit from the project. The church is already involved with sports in the community, hosting AYSO (the American Youth Soccer Organization). 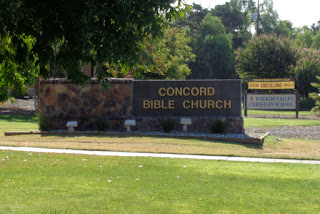 A different aspect of the church's concern for children is in the promotion of a banquet for the local Crisis Pregnancy Centers. In his announcement regarding the banquet, Jeremy said that the church needs to step up and care for women with unwanted pregnancies. 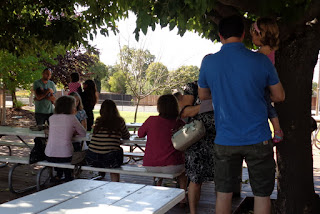 Frankly, the most exciting thing about visiting Concord Bible Church was seeing some of my youth group students all growed up. Some of those former spitball shooters are still at CBC, now providing leadership in the church and bringing children of their own to the place. The words "blessed" and "cool" would both apply.
Statistics:
Service Length: 1 hour 19 minutes
Sermon Length:17 minutes
Visitor Treatment: A staffed welcome kiosk just outside the sanctuary entrance has information and bulletins (programs), and we were offered name tags. Guests were encouraged to fill out attendance cards and leave them in a designated box near the door. 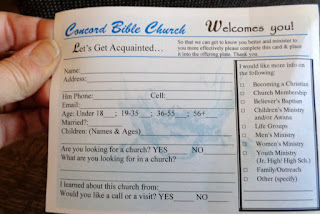 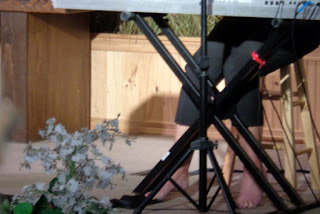 Songs: Blessed be the Name
My Hope is Built on Nothing Less/Cornerstone
In Christ Alone
Blessed Assurance
Miles to place: 75
Total California Miles: 12,712