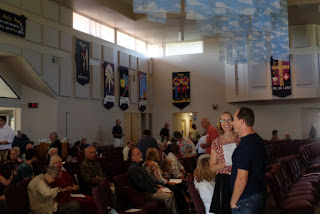 When you leave a place where you worked, there are obviously mixed feelings. If you liked the place, you want to see it prospering. If you did a good job setting up systems and training people, then you can take pride in seeing good work continue.

On the other hand, sin nature may wish to hear, "Things have never been the same without you." I'm happy to report that our visit Sunday to Healdsburg Community Church gave no satisfaction to any such nasty sentiments that might reside in my soul. 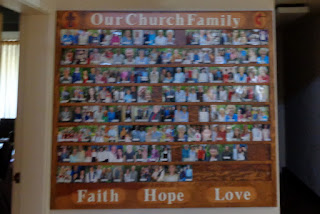 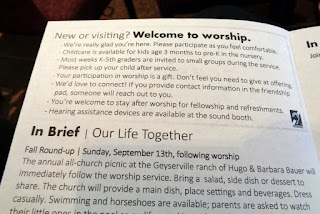 I clearly remember the first time we visited HCC -- which was, at the time, called Healdsburg Federated Church. (The former name came about when early in the 20th century the local Presbyterian congregation joined the local Methodist congregation. The congregation decided several years ago that they no longer wanted to sound like a government agency and changed the name to Healdsburg Community Church.) It was the Sunday after 9/11/2001, and there was an open prayer time that was powerful and comforting.

We visited a few other places but by Christmas had decided to make HCC our church home. After participating for a number of years, I was asked to join the staff of the church on a part- time basis. A little over two years ago, we decided to leave the church when Dean and Andrea Kladder were called to pastor the church.

We didn't leave because we didn't like the Kladders. They seemed to be a clear answer to our prayers for the church. We simply believed the transition would be easier if we left, and so we began our current adventure of a church visiting pilgrimage. 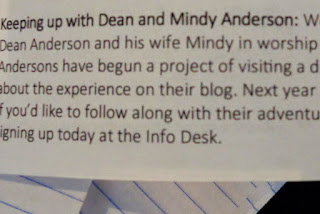 A standard element of these reports on church visits is on visitor treatment. I'm happy to report we were greeted quite warmly. Many people shook our hands and hugged us as if we were longtime friends; which made sense because, you know, we are longtime friends. During the announcements, Andrea not only greeted us but let people know where they could sign-up for our blog posts. I wish that would happen in more churches.

Our son Bret came along for worship. After the service we asked him what he thought. He said he appreciated that the service was well designed and everything had a clear purpose. He also liked the sermon (Bret is quite particular about sermons.) 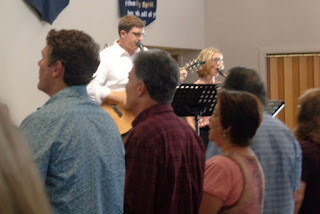 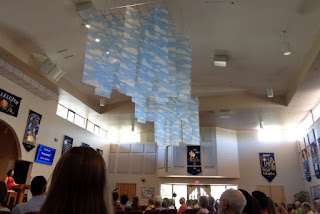 I agreed with his assessment. In the past, the services often had a bit of a shaggy dog nature. Many times the mike was opened for announcements, and anyone could come forward. Rambling was not uncommon (admittedly, on my part as well). Sermons (on occasion) had the dreaded feel of a late Saturday rush -- like those school papers that are written last minute and aren't very well organized. One never knew how long the service would last; it might go an hour and a half, it might go two. One awful Super Bowl Sunday, a guest speaker preached over an hour on the one day people are most antsy to leave.

I talked to Dean after the service, and he said that he and Andrea plan sermon series in advance and craft the sermon well ahead of Sunday (actually, they start working on sermons on Monday morning). On this Sunday, Andrea began a series on the adverbs of Jesus with the word, "Graciously." The text was John 8, the story of the women caught in adultery. I appreciated the point that Jesus not only showed grace to the woman but also to her accusers when he turned his back on them and allowed them to exit quietly.

We had lunch with friends from the church after the service. We asked what changes they'd noticed in the last two years. The first word that was spoken was "energy." Everyone seemed to agree that the place was much more vibrant than it had been for quite some time. Everyone agreed that there were many new people, though the exact percentage of the congregation that was new (25%, 40%, 50%) was a subject of debate. Everyone appreciated the young families with children in tow. (Dean and Andrea are rather young themselves, in their early 30's with a young daughter and a second child to come in just a few weeks.) 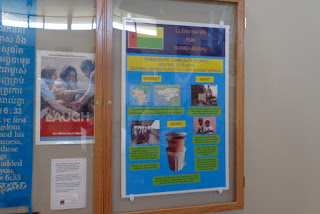 The church just adopted a new mission statement, "We are seeking to live like Jesus so others can experience God's love." The missions and outreach committees are looking for ways to fulfill that statement. The goal is to show God's love to people even if they never enter the church walls. One program begun recently is Free Coffee Fridays. The church property is catty corner from Healdsburg High School, so they decided to make coffee available to students in the morning. But the school is also across the street from an elementary school. They soon found themselves serving coffee to the parents of younger students... and serving hot chocolate to those younger students.

Another outreach in the church is to the people of the small nation of Guinea-Bissau in western Africa. One of the church members, Rich Kagel, felt a burden for the people of this poor country. A chemist, he began to research ways to provide clean water, a great need. The church has adopted the nation as well and is looking to do a missions trip there in the spring of 2016.

Somehow, Healdsburg Community Church is not only carrying on without us, but seems to be thriving. And I'm okay with that.
-- Dean

Statistics:
Service Length:  1 hour 10 minutes
Sermon Length:  20 minutes
Visitor Treatment: We were warmly welcomed (see above). Several people in the congregation (as well as the pastors) make it a priority to greet first time visitors soon after they come in. There is a brief greeting time early in the worship service, and "friendship pads" are passed down each aisle so that regulars and visitors can register their attendance and, when desired, request follow-up from the church
Followup by Tuesday Morning: we had lunch with one of the pastors on Sunday
Our Rough Count: 110
Probable Ushers' Count:  125 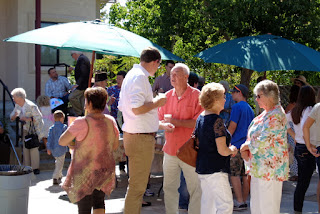