We go to church to bless (and are blessed) 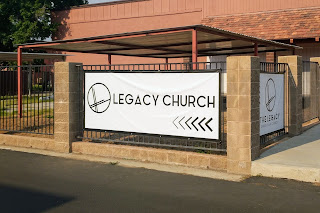 The Legacy Christian Church, Clovis, California
We were sitting at the end of a row toward the back of the church (as we often do. On rare occasions we want to make unobtrusive escapes). A minute or two before the start of the service, a bearded man walking down the aisle turned to us and said, “Welcome, beloved! God bless you!” before continuing to the front of the church. We received many friendly greetings from people (Mindy said four different women greeted her after the service), but his welcome stood out , so I immediately jotted down what he said. 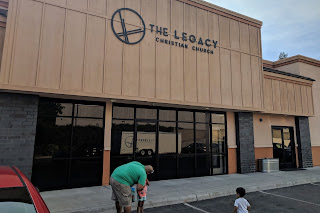 Mindy had seen the church’s Facebook event about commissioning their new building, and we noticed a sign for the church on our way home from shopping in Clovis. Google maps led us to a shopping center I’d never been to before (with a discount movie theater I’d never seen before. Wish I’d known about it earlier rather than days before moving out of the area.) 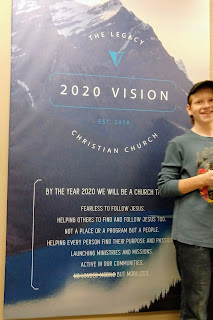 Immediately to our right as we entered the building, a notice board contained tags listing items the building still needed. They were clothespinned to the board so that people could take the tag if they wanted to give the item (among the items were acoustic panels and indoor plants). Directly across the lobby from the door, we couldn’t miss the “Vision 2020” mural with the church’s goals. The last one read, “NO LONGER MOBILE BUT MOBILIZED.” We would soon learn that when they launched Vision 2020 in January, they had no idea that just six months later that last goal would already be fulfilled. 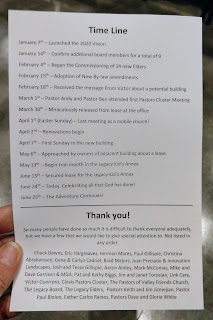 Before the church even thought about moving, they had already made huge changes in the first couple months of the year. They launched the vision on January 7th. On January 14th they confirmed nine new board members when there had previously been three, and on February 4th they installed fourteen elders (again up from three). Expanding the leadership team allowed for shared labor and was intended to prevent burnout. The leadership hoped more people would also provide more ideas. 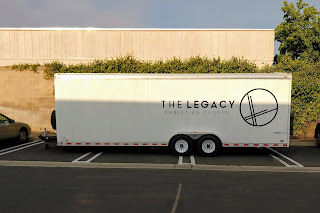 At the time, The Legacy was meeting in a school with offices in another location and worship service supplies in a storage unit. Every Sunday, staff loaded a trailer and hauled everything to the school where they had to set up and tear down everything every week. I’ve been part of churches that have this weekly ritual, and it can be wearing. 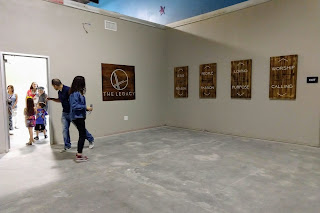 The church also adopted new bylaws on February 15th. In many churches the process of writing and passing those bad boys can take years in itself. Just three days after that, they heard about a building that might be available. By April 7th, they were in that new building. 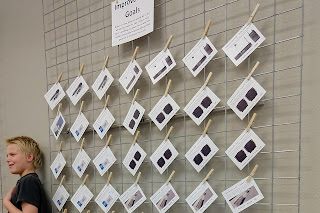 That first Sunday, we heard, there was dust everywhere, but that was okay. They didn’t have to load up that trailer anymore. The trailer is parked in front of the church now, and it’s used for storage. As he recounted the events of the past six months, Pastor Andy White noted that churches usually move slowly, and a church making so many changes in six months is...Well, he used the word, “insane.” 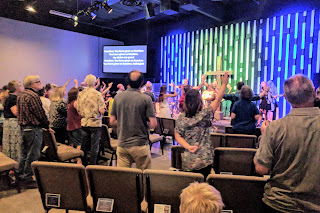 Something else happened during the last six months. Pastor Andy and Pastor Ben Bertolero became part of the Clovis Pastors Cluster. The program for the commissioning service thanked a number of pastors from other churches, and some of those pastors attended the celebration. 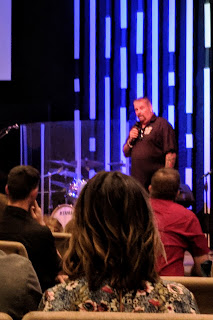 Pat Biggs. the owner of the building being commissioned, attended the celebration as well. He’d previously rented the building to Encounter Church, which he attended, but when that congregation decided to merge with Valley Friends Church in Clovis, Pat needed another renter, and he hoped it would still be a church. He prayed for the congregation, blessing the building and the people who gathered there. He also noted that in spite of the transition from one church to another, he’d never missed a payment. 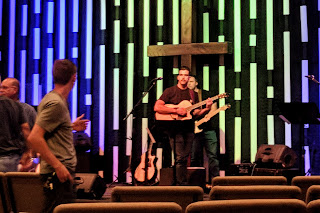 Pastor Andy admitted that we were there that night under false pretenses -- people were supposedly attending a building commissioning, but the church isn’t about the building at all. Andy said, “We’re pregnant.” (Certainly an attention-getting phrase.) “God is at work inside our body with a vision.” 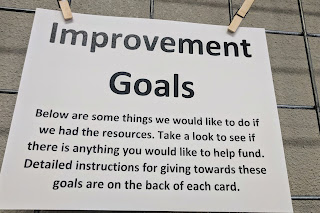 He continued by saying that praying for a building was a little strange -- kind of like asking people over to announce you were getting a new van would be strange. But, he went on, if you’re getting a new van because you’re going to have a new baby, people would be excited and the invitation would make sense. The Legacy Church is excited about a new building because they were excited about God’s vision to reach people. The building will house the people. 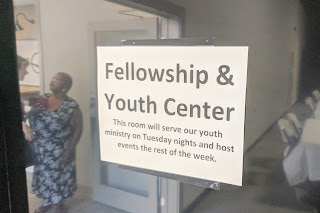 As the service closed, everyone was invited to look around the building and to pray for the ministry the church will have there...and to have some cake in the fellowship room. So I walked around the church, in the meeting spaces and supply rooms and even the restrooms, and then I did go to the fellowship room for cake (I even helped take the cake out of the boxes). 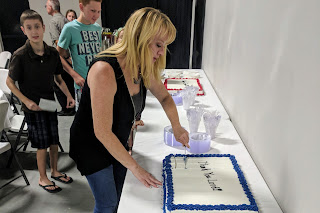 Mindy had found a seat at a table, so I joined her there. Amy was also there with two of her children, and I asked when she first started attending the church. She said she came as a teenager when her neighbor invited her. After a few minutes, we realized that she has another connection to the church now: she’s married to Pastor Ben and they serve as the church’s care pastors. While we were talking, he came over, and I saw that he was the bearded man who’d greeted us before the service began. 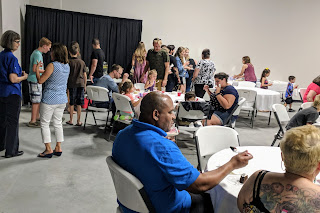 We told him about our project of visiting churches and our year long trip, and about our book about the trip. Ben invited us to come to a Sunday morning service, but we told him we were moving out of the area within a week, so instead, he asked if he could pray for us. Ben and Amy put their hands on our shoulders and asked God to bless us as we traveled and looked for work, and Pastor Ben asked if he could pray for our van, since we’d be driving that as we moved. (After we left, I noticed the humor of this, following Pastor Andy’s remarks about the oddness of praying for a van.) 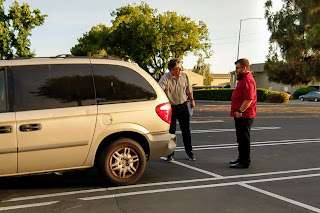 We walked out to the parking lot and showed Pastor Ben the bumper stickers on the minivan, and he laid hands on the hood and prayed. Our Dodge Caravan has over 223,000 miles on it, so his prayers were especially appreciated. We’ll be praying for The Legacy too, because as Pastor Andy said, “To say God has done a work in Legacy Church in the last six months is a gross understatement.” We’d have to agree. 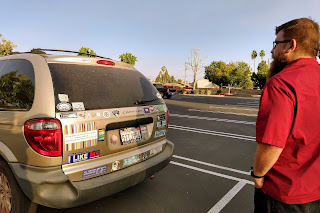