We finally go to church on purpose 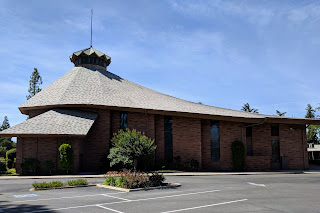 Pilgrim Armenian Congregational Church, Fresno, California
“Sorry to interrupt you,” Paula said. “You can take pictures of whatever you like.” I had been taking photos in the lobby at Pilgrim Armenian Church, and Paula wanted to introduce herself because she saw I was a visitor. I was happy to have photographic reassurance because plenty of people seem to think taking pictures in a sanctuary is the equivalent of making graven images to be worshiped. Or maybe stealing souls, I don’t know. 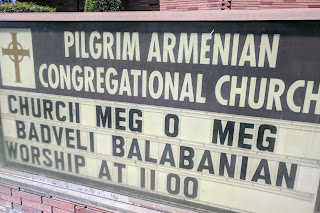 Instead of scolding us, Paula was one of many who made us welcome on our visit. It’s nice when we’re actually invited to a church; usually we find churches through internet sleuthing. We had intended to visit this church earlier, when we’d planned on doing a month of Armenian churches (Fresno has a large Armenian population). We’d been especially excited about visiting the church because we had visited the San Francisco church pastored by Nerses Balabanian in 2015. But Mindy got confused on her direction the one Sunday we’d tried to go, and we found ourselves at another Armenian church by mistake. 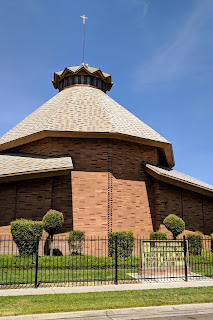 We’d still intended to visit Pilgrim, but our work schedules kept getting in the way. Mindy often had to be at work at Macy’s at 10:45 am, before Pilgrim’s worship service began. I was usually working hotel night audit starting from 11:00 pm Saturday to 7:00 am Sunday, and I had a hard time staying awake longer than the 8:00 am, at most a 9:00 am service. But as we were finishing up our jobs in anticipation of moving out of the Fresno area, we received an email for Pastor Balabanian’s wife, Sevan. 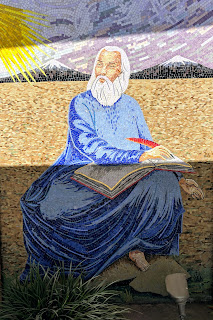 Sevan wrote that she had come across our blog. After twelve years at Calvary Armenian Congregational Church, they had come to Fresno just eight months ago. She invited us to visit their new church, and suddenly a visit to PACC shot up even higher on our priority list. 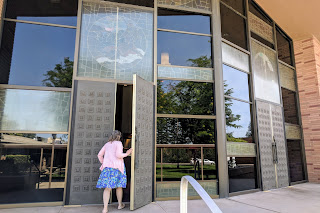 So on Sunday, we entered the sanctuary and sat as far back as we could (some of the back rows were roped off). We noticed teenagers wearing blue t-shirts, first almost a whole row of girls, then some boys sitting behind them. The organist played “What a Friend We Have in Jesus” using the chimes. Posted on the screen was the morning’s sermon title, “The Power of the Quiet Testimony.” We soon learned that Pastor Balabanian took quiet quite seriously. 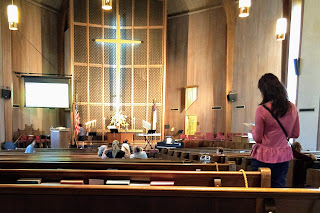 As the organist finished playing, Pastor Balabanian stood before the congregation and gave a kindly reprimand. “I ask you to sit quietly and listen to the music. The organ prelude is not the time to fellowship, it is time to put things out of mind. Music is not for entertainment, but for worship.” 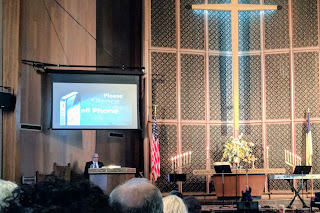 This subject has been an ongoing conversation for Mindy and me (but not in sanctuaries just before the worship services). Is it better for a church if people are silent and meditative prior to worship or is it better if there is lively conversation and laughter? We go back and forth on this, but Pastor Balabanian argued that fellowship, conversation, laughter, and hugs were all good things, but for another time and place on the property. 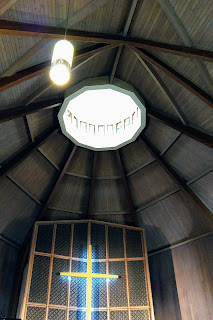 He then greeted the congregation with a joyous, “Good morning, I love you all!” People responded with return proclamations of love. “I always love to start with the Word of God,” he added, leading into a responsive reading from Psalm 39. (The Scripture was projected on the screen in English and Armenian, though only the English was read aloud. The same was true of the song lyrics.) 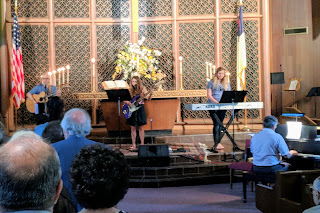 One of the worship songs was Amazing Grace sung to the tune of House of the Rising Sun. It brought back my days as a student and a leader in Young Life. After the service I thanked Kevin Kasper, the associate pastor and worship leader, for using it. He told me he’d appreciated a version of the song performed by the Blind Boys of Alabama, and one of the founding members of the group, Clarence Fountain, had died just days before. (Don’t quote me on this, but I’m pretty sure none of the Blind Boys are Armenian.) 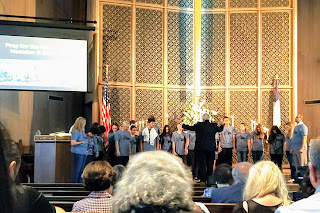 We were happy to be there for a rather special day in the life of the church (though Pastor Balabanian said all Sundays are special). They were commissiong two missions teams. The teens we noticed in the blue t-shirts were leaving the next morning for Houston, Texas, where they’d be doing construction work. Later in the month, a team of adults would leave for Armenia. 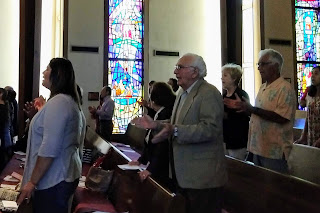 The morning’s visitors included a group of women from Light-House Recovery Program, which aids women battling problems with addiction. During the sermon, Pastor Balabanian asked questions expecting a response from the congregation, and the women were frequent responders. People also introduced friends they’d invited to church, but we retained our anonymity. 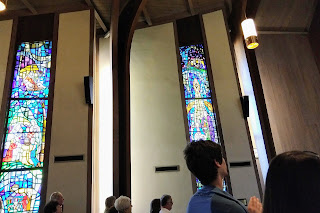 The sermon was part of a series on I Thessalonians 4: 9 - 12 where Paul wrote, “aspire to live quietly.” Pastor Balabanian pointed out that this seems like an oxymoron to us, because we associate aspiration with grand things, not quiet. After all, “This is the United States of America, we are not silent!” Paul also wrote in this passage to “mind your own affairs,” which Pastor Balabanian said was not a natural thing for Armenians. Paul also wrote to “work with your own hands,” to use your gifts. Pastor Balabanian pointed out, “Whatever is given to you is not for you, but for you to give to others.” 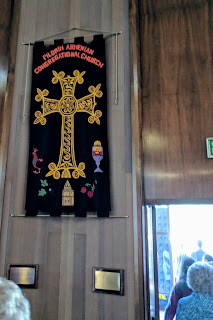 At the conclusion of the service, Pastor Balabanian asked members to stay for the congregational meeting rather than go to the fellowship hall for refreshments. We decided to try to find Sevan, and when we did, she greeted us warmly and introduced us to her husband (who gave us both warm hugs). He needed to go to the meeting, so we went to the fellowship hall with Sevan.

We’ve learned to expect food at Armenian churches, and we were not disappointed. Though there wasn’t any traditional Armenian food (unless you count the sandwich rollups), we enjoyed apricots, watermelon, kettle corn, and two cakes -- one honoring the Texas missions team and the other honoring the Armenian missions team. We sat down at a table with a couple who had attended the church for years (even when services were conducted in Armenian, though they don’t speak the language.) 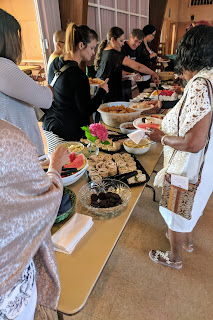 Armenians have a rich and vibrant tradition in the Fresno area, and Pilgrim Armenian Congregational Church is certainly a part of that tradition, but we were happy that this place celebrates Jesus more than their heritage. 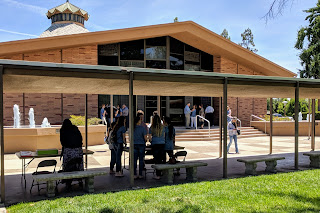 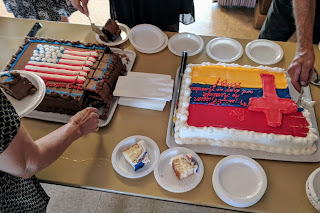