We go to church kind of for a t-shirt 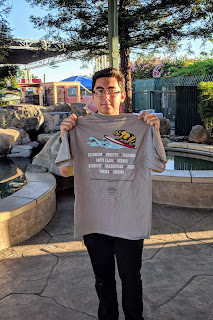 Decision America California Tour, Fresno, California
It usually isn’t wise for people who work at a hotel to talk about who stayed there. But hey, I’m done working there at the end of the week, so I guess I can tell you that folks from the Franklin Graham’s Decision America Tour stayed as guests this past week.

When I checked in one of the truck drivers, he mentioned the thousands of pounds of t-shirts he transported. After he left, Sam, one of the other front desk clerks, pondered how much his truckload was worth if they were charging $55 a shirt like they do at concerts and sporting events. 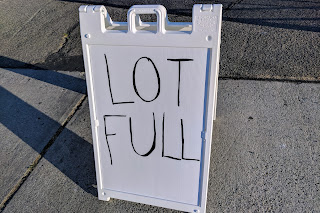 On Monday evening, we had the chance to find out. We drove to the Fresno Fairgrounds and followed the signs directing us to public parking, but the lot was full. There was plenty of street parking in the neighborhood, so we found a spot and walked a few blocks to the amphitheater gate. As we crossed the street, we couldn’t help noticing the protesters holding simply baffling signs about Israel and abortion and one sign that read “Little Red Riding Hood had more discernment than Christians.” Mindy puzzled over the grammar of this for a long time. 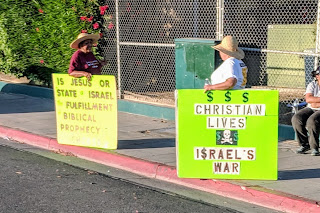 We were greeted by ushers pointing us toward the booth for free t-shirts (which, for those of you who are less financially astute, is significantly less than $55) which already had a big crowd. There were quite a few other booths, including one for Spirit 88.9 radio, another for Samaritan’s Purse, and several food trucks. Another volunteer was making sure everyone who wanted it got a free bottle of water (this is Fresno, and it was a warm evening. The water was appreciated). 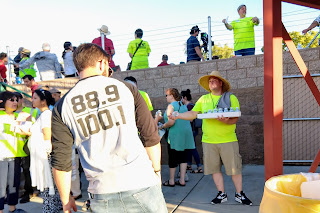 We found seats in the ¾ full amphitheater about ten minutes before the 7:30 pm start time. Right on schedule, Jeremy Camp, the tour’s musician, was introduced. Camp is a Grammy-nominated, Dove-winning Christian singer -- as any listener to Christian music radio knows, and he said he couldn’t refuse when Franklin Graham asked him to join the tour to “pray for the state, pray for the nation and proclaim the name of Jesus.” 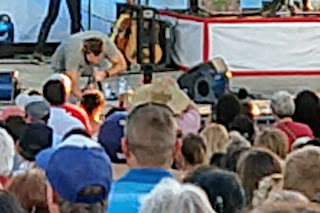 People stood, and many sang along with the lyrics on the screen (lyrics at times accompanied by brightly colored abstractions.) After the third song, Camp asked a little a girl in the front what her name was, then told her, “Annalise, I love how you were dancing and singing for Jesus! Not everyone is going to have this same passionate jumping up and down experience.” He said that was okay, and he added, “There are a lot of kids here, and that is awesome!” He quoted 1 Timothy 4:12, the verse about not letting anyone look down on you because of your youth. 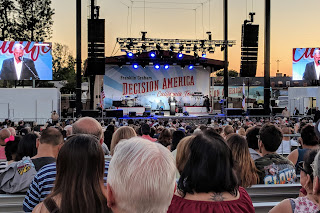 After about 20 minutes of music, Camp introduced Franklin Graham. Graham is the son of the great evangelist, Billy Graham. Several years before his father’s death, Franklin became the president and CEO of the Billy Graham Evangelistic Association. When he arrived at the podium, Graham referred to his heritage, saying, “Wow! What a night! It’s hot here! I was last here with my father for a crusade in 2001.” 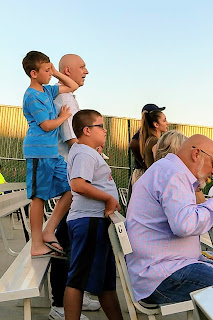 He quickly moved to the reason for this tour of ten California cities: “Our country is in trouble. Your state is in trouble.” (There were sounds of agreement from the crowd.) “But there are things we can do. We can pray. We need to pray for our leaders, as God commanded us.” When he mentioned the names of Nancy Pelosi and Dianne Feinstein, there was scoffing in the crowd, but Graham said, “It doesn’t matter whether you like them or not, we are commanded to pray for them. If we pray, we can see change. God can turn this state around.” 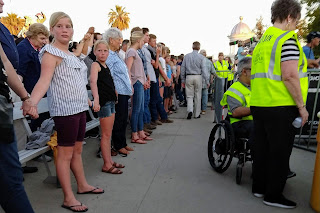 Graham said, “We need to pray for Governor Brown, that he will be saved. Pray for Nancy Pelosi, that she will be saved.” (Curiously, when he mentioned President Trump, he didn’t mention praying for his salvation.) He encouraged everyone in the crowd to stand, join hands with the people next to them, and to pray for the leaders of the state and the country, reminding the audience that Christians are commanded to do so in 1 Timothy 2:2. 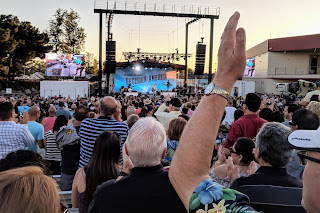 He urged Christians to vote and to run for local office. He said Christian voices need to be heard. “I’m not telling you who to vote for, but vote for candidates that support Biblical principles. Not that they necessarily live by them, but support them.” (I don’t remember those kinds of addenda being noted by any Christian leader pre-Trump.) “We sense we are losing our freedoms as our government becomes more secular, turning to science and public opinion polls rather than Scriptural principles.” 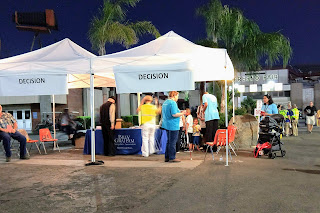 He opened his Bible to read the story of Nicodemus visiting Jesus from John 3. This was more of a straightforward Gospel message, urging people to put their faith in Christ. “Being a Catholic can’t save you, being a Baptist can’t save you, being a Presbyterian can’t save you…” He went through several other denominational affiliations, making the point that what we really need isn’t religion, but a personal relationship with God through Jesus Christ. 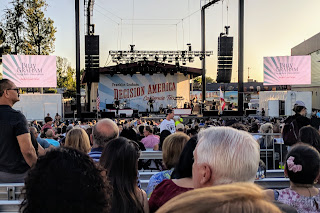 He told his own story, “I was raised in a Christian home with great parents...When I grew older, I tried to fill my life with parties, girls, alcohol...But I was sick and tired of being sick and tired… I deserve God’s wrath, but I am forgiven because on the cross, Jesus took the sins of mankind and on the third day God raised Him from the dead, and He is here in Fresno.” 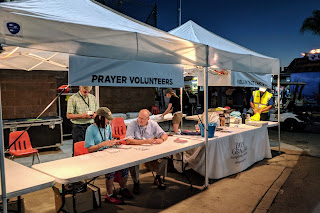 He urged people to pray along with him to receive Christ as their Lord and Savior and asked people who wanted to pray with him to stand. Dozens of people, including whole families, did stand. “For those standing, I’d like to lead you in a prayer. Prayer is just talking to God. And remember this, if you remember nothing else: ‘God loves you.’” 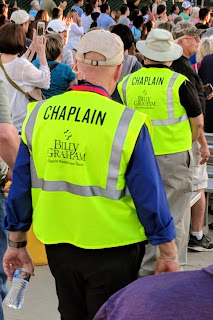 Volunteer chaplains moved around the amphitheater with literature for those who’d stood, and Graham said that if anyone hadn’t stood, they could text the word “Decision” to the number on the screen to have that material sent to them. The information on the screens was in both Spanish and English. 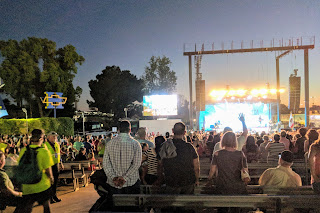 After the message, Jeremy Camp came out again for several more songs (many people, including at least one group who’d come in a bus from a retirement community, left during the singing). As I left, a chaplain asked if I’d received Jesus as my Lord and Savior, and I assured her I had, long ago. Many more people (probably not all associated with The Billy Graham Association) offered us tracts as we headed for the exit. We took some, and Mindy got a shirt that we plan to give to Sam. I wonder if I should tell her I paid $55. 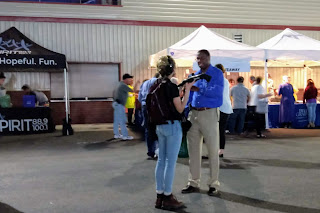 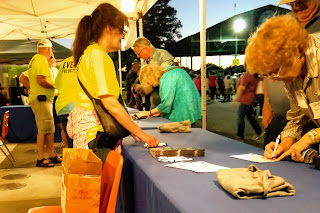