We go to church and get busted 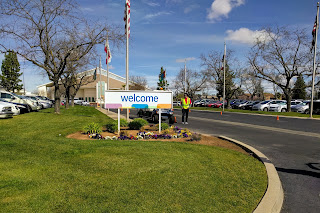 Peoples Church, Fresno, California
“We noticed you folks taking pictures, so I thought I’d talk to you. Not that I think you’re terrorists, but you never know.” That’s how Jay, head of security, introduced himself -- and I really appreciated it. It’s a sad but true thing that churches have to think through how to keep their congregations safe. Like recent school shootings, church shootings continue to be front and center in the news. Church leaders need to have plans to deal with all contingencies, and they need people like Jay keeping an eye out. 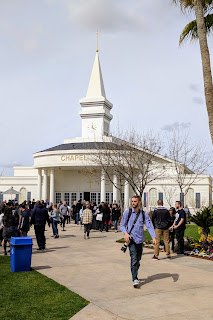 Shootings, of course, aren't the only danger. There’s the lesser -- but still serious -- danger of people with cameras posting pictures to social media. Perhaps they innocently posted pictures of children that could be seen by the wrong people. Or they could not so innocently attack a church via social media for theological, political, or personal motives. So though security is not listed among the spiritual gifts in Romans 12 or Ephesians 4, it’s a necessary part of 21st-century church life. 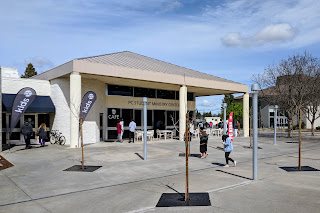 There’s a lot of campus to protect at Peoples Church in Fresno. We got there early, so I took a walk around the grounds before going inside the auditorium. The gym had tables set up for a banquet of some kind; I looked in the youth room and the playgrounds. Mindy sat in a courtyard outside the prayer garden and peeked into the prayer room while I looked at the buildings for Fresno Christian School, which isn’t run by the church (the website calls it a church partner). There is also a large chapel next to the large sanctuary. And just outside the chapel, lunch was being served. 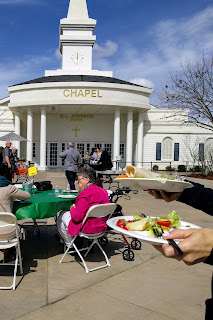 Tables and chairs were set up on the lawn, and Asada tacos were on the menu in the morning's bulletin. Mindy approached a man who seemed to be collecting money and asked what was going on. When he found out we were visitors, he immediately said lunch was free for us. Richard at the information center told us the same thing: lunch was a gift to first-time visitors.

I really appreciate it when a church can serve meals. Peoples Church has worship services at 9:15, 11:00 am, and 12:30 pm. During the first two services, the church offers children’s and youth ministries (described in the announcements as a “fun and safe place to learn about Jesus in age-appropriate ways”), but they’re not in the third (nursery care is available for all three services). If someone volunteered by teaching Sunday School, monitoring the parking lot, or providing security before or after going to a worship service -- that makes a long morning. It’s nice when a meal is available. Even better, meals provide a great time for conversation and relationship-building, and we need more avenues for that at church. 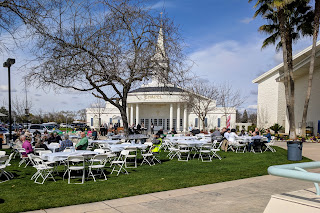 But we didn’t come for lunch (though it looked good), we came because the church has been recommended by people in bars we were visiting for our other blog. Folks said they liked Peoples Church and particularly Pastor Dale Oquist’s preaching. 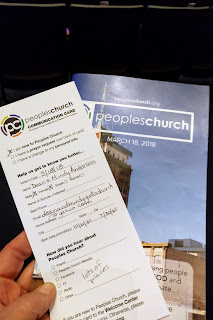 Dale’s wife, Joni, made some announcements. (She introduced herself saying, “It is my honor to work with women of this church.”) She admitted there were many announcements and encouraged people to study the bulletin and check the church website.

Pastor Oquist also made some announcements and encouraged people to pray for God’s blessing on another local church, CrossPoint Church and their Pastor Johnny Mendez. (I’m guessing praying for a different local ministry is a regular thing. How great to view other churches as coworkers rather than rivals!) Pastor Oquist introduced himself saying, “I’m happy to serve you each and every week.” 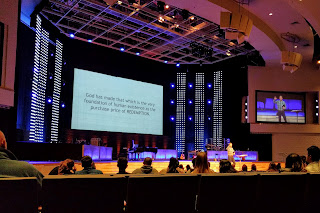 The sermon was about blood. I appreciated that, because doing a sermon about the role of blood in redemption isn’t a topic you’d get from, say, a focus group, but it is an important theological concept. Pastor Oquist cited Leviticus 17: 10 -11 and the Jewish laws against drinking blood and noted the theme of blood runs throughout the Bible. 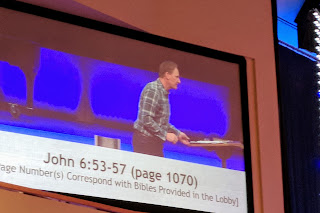 I was impressed by a little technical aspect of the sermon. It had two points: 1) There is life in the Blood, and 2) There is power in the Blood.

Do you know how hard it is for pastors to resist making three points? So few can resist the temptation. 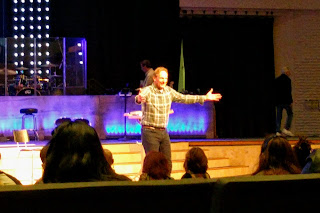 Pastor Oquist is a good preacher. He presented his points well, his insights were fresh and illustrations relevant. For one illustration, he called up Matt Perkins, the worship leader. Matt told an engaging story about having a serious illness, which his doctors treated with Matt’s own blood. I liked that he let Matt tell his own story, and it was a powerful one. 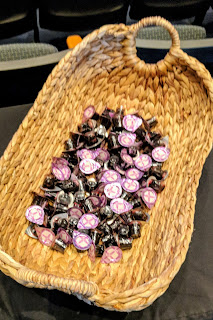 My one little quibble with the sermon had to do with the discussion of John 6 where Jesus said people must “eat His body” and “drink His blood.” Pastor Oquist said this passage “obviously” shouldn’t be understood literally. It wasn’t obvious to many of Jesus’ followers -- who left Him because of His words. And it isn’t obvious to those in the Roman Catholic church who believe in transubstantiation, the doctrine that the bread and wine, in reality, become the body and blood of Christ. I happen to believe Jesus was using powerful symbolic language, but that hasn’t been obvious to people throughout the centuries. 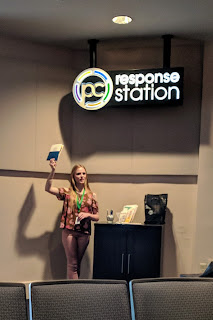 At the conclusion of the service, people were invited to come to the front to pray, to go to one of the “response stations” in the back to learn more about the church or go to the VIP room for first-time visitors. We went to our car, but I was happy those options were there. And I’m glad Peoples Church is in Fresno, clearly presenting God’s Word to large congregations every Sunday. 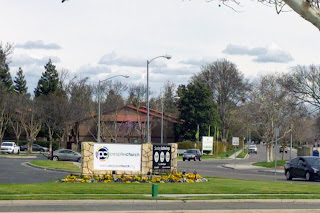