Mindy Goes to Church at the Airport 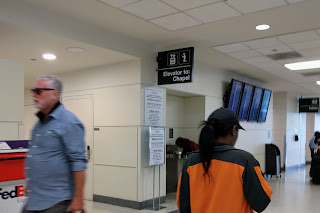 Midway Airport Chapel, Chicago, Illinois
I was at the gate, waiting to find out if I my standby status would get me on an earlier flight home, when I heard the announcement: “There will be a non-denominational Christian worship service in the airport  chapel in fifteen minutes, at 2:00. The half-hour service is open to all.” 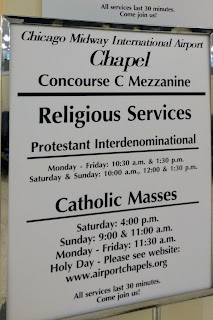 I’d noticed the signs for the chapel and idly wondered if I should check it out, but I’d been hurrying to the gate -- and the gate agent told me it’d be about 45 minutes before my standby ticket could be confirmed for this flight. Spending half an hour in the airport chapel at Midway airport in Chicago sounded perfect.


About half of the United States' busiest airports have chapels with chaplains and regularly scheduled worship services. JFK in New York has four chapels (and worship times) for Catholic, Protestant, Jewish, and Islamic travelers. Most chapels, however, are designated as "interfaith," serving anyone who wishes to sit quietly and pray or meditate. I was curious what Midway offered. 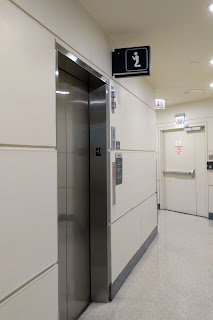 I had to ask for directions from a rather bored airport police officer (who pointed out the very obvious signs), but after going down a corridor, into an elevator, and up one floor...I saw a doorway with a few tables of information around it: looked like a church entry hall to me.

When I went through the doors into the chapel itself, I noticed another woman was sitting on the floor by the windows across the room. She had a book open in her lap, and I realized she was reading Psalms quietly. Not wanting to intrude, I sat down on the chairs on the near side of the room after taking a few pictures. A few minutes later, a man in a clerical collar came in and introduced himself as Pastor Tom. As he shook my hand and invited me to move to the other side of the room, the woman stood up to greet Pastor Tom too. 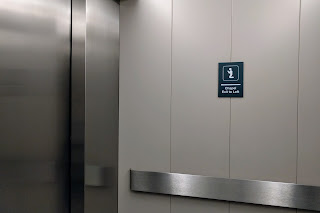 “Renee! I’m glad to see you!” he said, and introduced us to each other. He and Renee continued a conversation that had obviously started last time they’d seen each other, and I gathered my various belongings to move closer to where she was. I heard her say she had to catch her flight and wouldn’t be able to stay for the worship service, and she left a moment later. 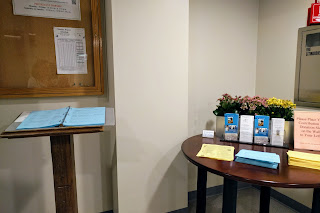 Pastor Tom excused himself and opened the door to a storage area. A few minutes later he brought out a cross and set it on the table at the front of the room, explaining that the room was used by Catholics, Protestants, Muslims (there was a stack of prayer rugs on a chair near the door), and a few Orthodox Jews, so religious symbols needed to be portable. He ducked back into the other room, reemerging in a black clerical robe. 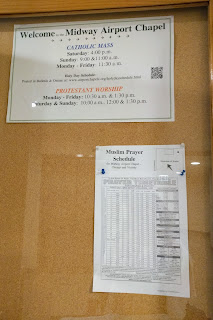 We were waiting for anyone else who might come in -- occasionally employees or airport police come in when their schedules allow -- and Pastor Tom and I chatted for a few minutes.

He mentioned that many of the Protestant chaplains who serve at the Chicago airports are from the Evangelical Free Church. (Skyword, “the only authorized Christian Protestant chaplaincy privileged to serve the Chicago O’Hare and Midway airport communities,”* is a ministry of The Moody Church in Chicago). Dr. Hutz Hertzberg, the overall leader of Skyword chaplains, was ordained in the Evangelical Free Church (as was Dean). 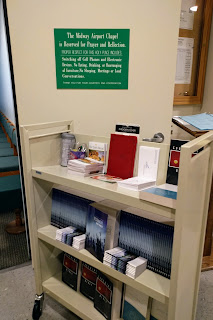 Pastor Tom serves in the Reformed Baptist Church, but he mentioned that he grew up in a nominally Catholic family. He was quick to tell me that at least half of the people who come to the Protestant worship services at Midway, in his experience, are Roman Catholic, and he uses songs from the missal as well as hymns more commonly associated with Protestant worship. “God prepares us for the ministry He has for us,” Pastor Tom said.

After we talked for a few minutes, he began the worship service with a blessing from the book of Nehemiah. We sang “My Jesus, I Love Thee” acapella from a laminated copy of the hymn. I wondered if we skipped the verse that begins, "I love Thee in life, I will love Thee in death" because some who attend the worship service are fearful about plane crashes. Still, we sang three verses together, and I thought we did a nice job with the harmony. 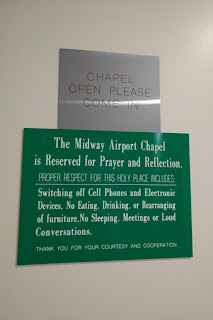 As he’d mentioned when telling me a little about Renee, part of the worship service was a time of sharing praise and prayer requests, and Pastor Tom asked if I had any prayer requests. I shared something, and he did as well. Then we prayed. During the prayer, a man came in and took a prayer rug from the chair near the door. Pastor Tom had mentioned earlier that this sometimes happened during worship services, so I wasn’t too surprised when Pastor Tom paused his prayer to ask the man to pray outside the chapel. The man didn’t seem bothered by this, and a few minutes later, he came again to quietly return his rug. 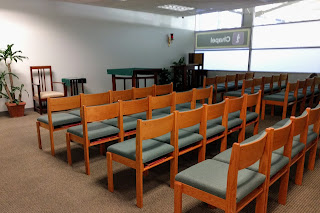 After our prayer (concluded with the Lord’s prayer, which in the printed program used the word “debts,” though Pastor Tom used the word “trespasses”), Pastor Tom said he’d give an abbreviated version of his sermon, since he didn’t want me to miss my flight. He read what he called “Paul’s resume” from Philippians 3: 4-14. 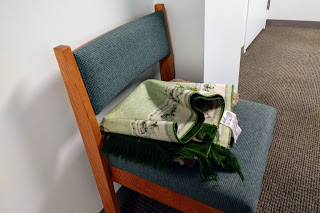 “What have we given up?” Pastor Tom asked. “What might we be called to give up? Am I willing to know Jesus in His suffering even to death?” 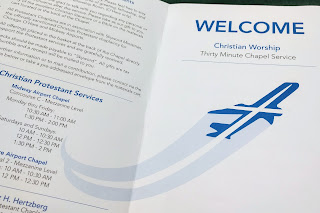 A few minutes after 2:00, he concluded the worship service with a benediction, and I hurried back to the gate to see if my standby ticket would get me a seat on the plane home. As I went, though, I was grateful for the opportunity to have a moment to worship in the brief time I was at the airport.

Statistics:
Service Length: about 20 minutes
Sermon Length: about 7 minutes
Visitor Treatment: Everybody who comes is a visitor, except the chaplains. Pastor Tom makes it a point to greet each person, introduce himself, and introduce each person who attends to the others in attendance 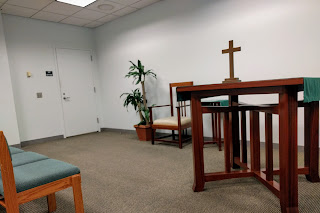 Followup by Tuesday Morning: none
Our Count: 2
Probable Ushers’ Count: 2
Snacks: Midway Airport doesn’t have refreshments, but they’re available at worship services at O’Hare
Musicians: vocals only
Songs: “My Jesus, I Love Thee”
Distance to Church: about 100 yards and up one level from my gate, 2,250 miles from home by car
Open WiFi: I couldn’t get the airport wifi to work for me
Tie/Suit Count: none
Church Website: http://www.moodychurch.org/skyword/
http://airportchapels.org/ 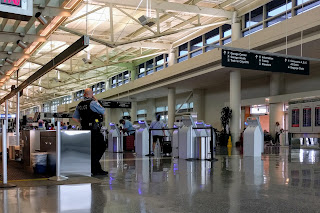