We Go to Church at a Ball Park 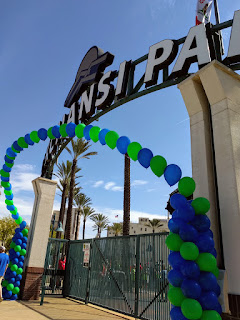 Easter at Chukchansi Park, Fresno
“Did you put on any lotion?” one redheaded woman asked of another. The question would be quite odd in the worship center on an average Sunday at the Bridge Church, but it made sense on a sunny day at Chukchansi Park, the home of the Grizzlies in downtown Fresno --  and the location of this Sunday worship service. There had been concern about rain on Easter morning or excessive heat, but instead the day was sunny, near 70 degrees, with a light breeze as the morning warmed up. So the fair skinned were justly concerned about the sun. 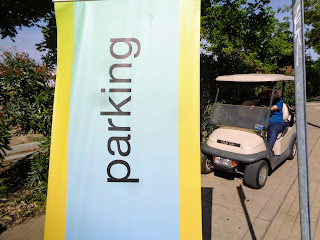 Months ago The Bridge decided to celebrate the Resurrection outside church walls. The slogan for the church is “A Church for the Valley,” and Pastor Andrew Smith said the service was being held at this iconic venue of the Valley to carry out that call. Hundreds of volunteers contributed hours to the project decorating the stadium, preparing lunch and activities after the service, and promoting the event beforehand. Smith said, “This is the church mobilized to help and love people.” 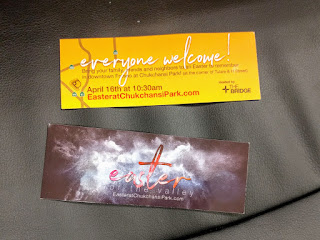 In the weeks leading to Easter, tickets were available to distribute to friends, family, and neighbors. One didn’t need a ticket to enter the stadium -- they were purely promotional items. 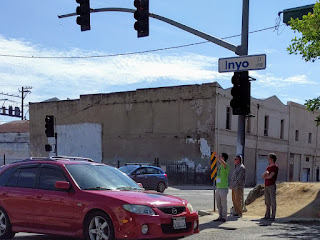 We drove downtown and were directed by a cheery attendant who waved drivers into a stadium parking lot, greeting each carload. As we walked down the street to the stadium, a great number of volunteers in bright green t-shirts pointed the way to the entrance and greeted us with “Good mornings” and “Happy Easters.” When we came to the main gate, people offered first time visitors bags containing promotional material about the church along with tickets for a free hot dog lunch following the service. 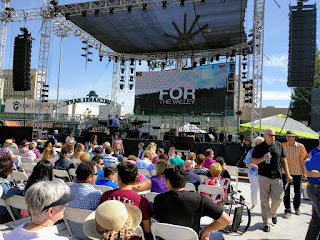 Hundreds of chairs faced the stage, which had been set up for a concert at the stadium the night before People steamed down the steps through the stands to take their seats on the field. The service didn’t begin promptly at 10:30 am;  instead, someone announced from the stage that the service would start in five minutes to allow people more time to find their seats. A five minute countdown appeared on the front screen. 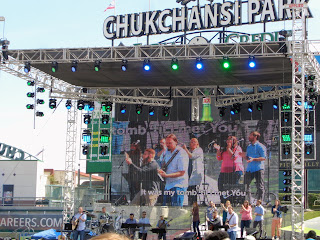 The band opened with a song of victory over the grave, but not any of the traditional hymns (“Christ the Lord is Risen Today” or “Up from the Grave He Arose”). People  in Easter Sunday dresses and suits ready for the Easter parade and people in shorts and t-shirts were encouraged to stand and “put their hands together.” 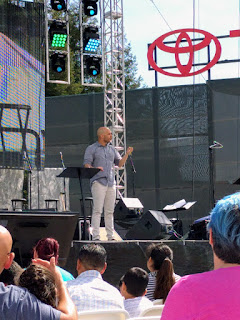 After several songs and a video about the church, Pastor Andrew Smith came forward to preach, concluding a series on Jesus’ temptation in the wilderness from Matthew 4. He had come to the portion where Satan offered the world to Jesus if He would bow and worship the prince of darkness. “Let’s be honest,” Andrew said (a phrase he often repeats), “What is worship? When we worship we give all we have in hope of getting everything we need.” He said we were made to worship but we often misplace our worship. Our career, money, another person can’t provide all we need. Only God can. 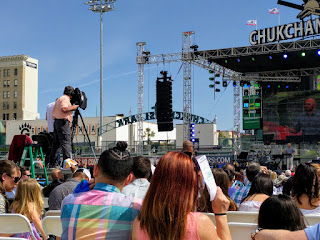 He talked about how we attempt to make that exchange of worship for all that we need. He used the illustration of exchanges made in action movies, of say, money for a person, and how those exchanges never seem to work well. He said in real life our exchanges of devotion for what we need never goes well, when we barter with anyone or thing besides God. 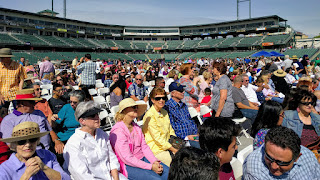 And what do we need, what do we desire? Three things, Smith argued: direction, meaning, and significance. God alone can provide these things. Everything we hope for can be found in Jesus Christ alone. 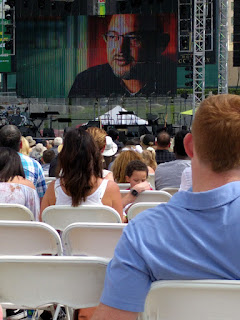 Smith illustrated how Christ can save a life with a video about a man on the Bridge’s tech staff, Reuben. This man had life without Christ or as he put it, “For years I tried to get Jesus on my team until I realized I need to be on Jesus’ team.” He came to a point in life when he faced a prison sentence, but God miraculously provided release into a drug program instead. After the video, Smith called Reuben forward to the applause of the audience. Smith said that Christ is still changing lives and offered hope for change for those attending. People were asked to talk with the prayer team. With a tent set up on the field, the team would be there throughout the afternoon. 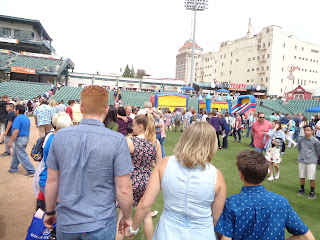 After the sermon, another pastor announced that there were more tickets available for the free lunch, or people could buy lunch from the concession stands, which were opened for the occasion. (The free lunch was a hot dog, a large cookie, a bag of chips, and a bottle of water. We were excited to see the water bottles, because we’d heard in Sunday School that the cost of the bottles might be prohibitive.) 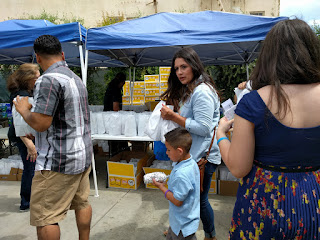 There were Easter egg hunts and egg races for kids, bounce houses, games, and a couple of photo booths. The Bridge wanted to present the abundant life of Easter and I think the hundreds of people who came found it. 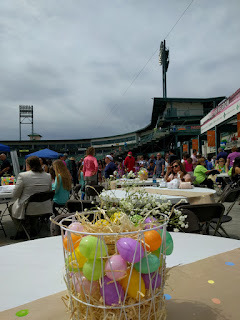 (We’ve made a commitment on this blog to go to a new church every week, so you might quite reasonably wonder if that’s what we did this week since The Bridge is the church we’re attending regularly. But the church was meeting in a different place, so that kind of counts, doesn’t it? Also, we did go to a different church during the week, -- a drama on Good Friday at Truth Tabernacle. We’ll write about that next week.) 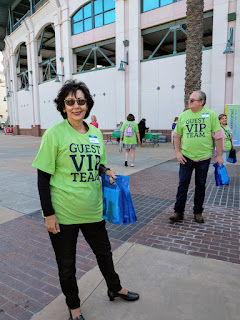 Visitor Treatment: As we entered the park, people in bright green “VIP Guest Team” tshirts asked if we’d been to The Bridge before, offering a bag of information and a lunch ticket to visitors. During the worship service, guests were welcomed and all (guests and regulars alike) were invited to fill out the connection card at the bottom of the half sheet map and schedule. All were encouraged to participate in the afternoon’s festivities.
Our Rough Count: 2500 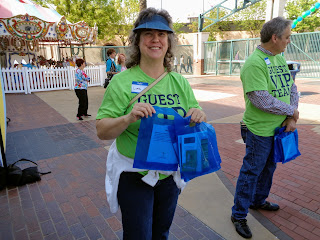 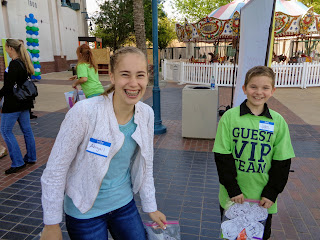 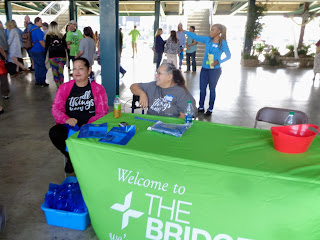 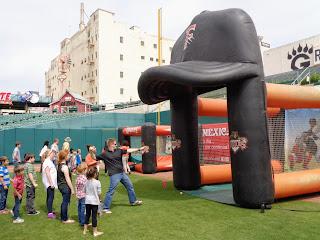 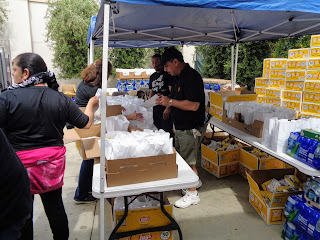 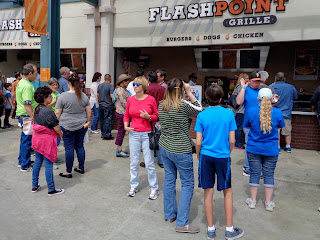 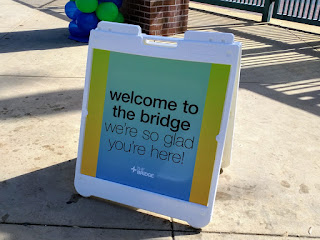 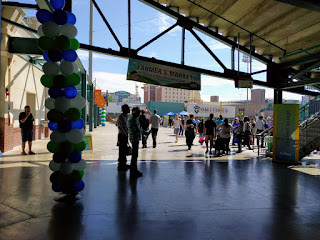 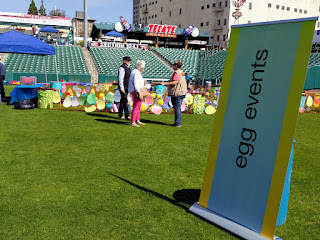 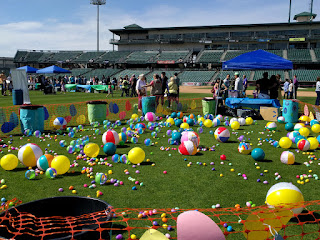 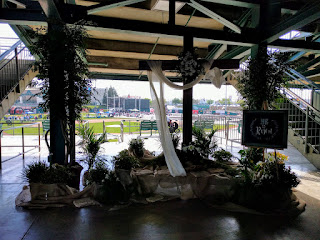