Homes for the homeless in Austin 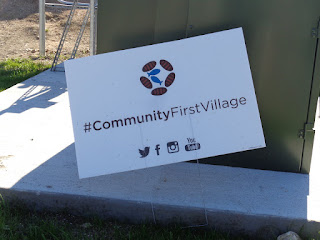 "We're all about forming relationships here," Matt, the assistant property manager, told us when we asked about the purpose behind the permanent community that's taking shape on the western side of Austin. Through a slow but constant process, a ministry originating in 1998 with five men who wanted to love their neighbors has become much more than a minivan loaded with food. 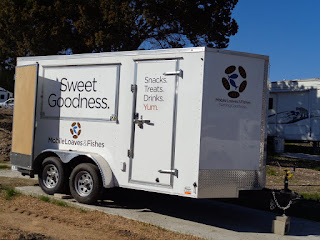 Mobile Loaves & Fishes now has a fleet of modified catering trucks that serve food, clothing, hygiene items, and other life sustaining material to homeless people in Austin and other communities. In a quote on their website, Alan Graham, a founder and now president of the organization, says, "Everything we do is about relationships. The biggest lesson we have learned over the years is that we are not a food ministry. We merely use food as a conduit to connect human to human and heart to heart." 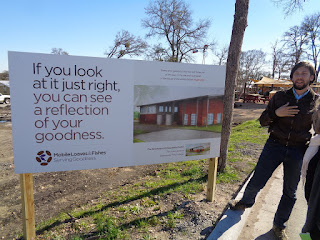 Community First! is one of a number of Mobile Loaves & Fishes' projects. Their website describes the village as "a 27-acre master-planned community that will provide affordable, sustainable housing and a supportive community for the disabled, chronically homeless in Central Texas." From that description, I would have pictured cinder-block buildings in tidy rows with (perhaps) a community garden and a recreation room. That's not at all what we found. 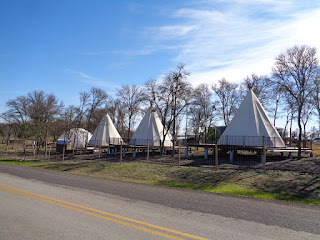 As we drove up, the first things we noticed were enormous teepees. Later, we found that these were bed and breakfast spaces for volunteers. Dean immediately noticed the large movie screen, which (through Alamo Drafthouse) will be used for free outdoor movies for the community. 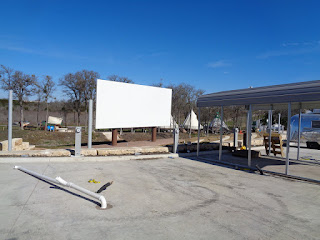 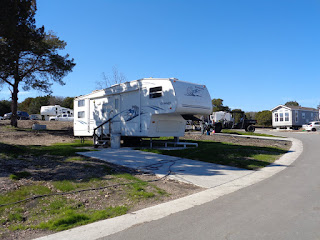 As we walked around, we saw the mobile home park, the oldest part of the community. Across the center road, past a central area with a dining tent, gardens, chickens, a giant chess board, and a memorial marker for residents who have died, miniature homes and canvas cottages face meandering paths. The variety of homes is remarkable. Matt told us there were several models, but it seemed no two were identical, although all of them were attractive. Homes were at all stages of completion, and workers were everywhere. 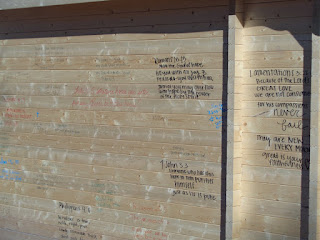 This is not institutional housing.

I think my favorite moment was when we passed a house that was built, but didn't yet have its siding in place. The pine walls were covered with handwritten Bible verses of blessing, conveying the hopes and prayers of the builders for the future residents of the home. Matt told us that whenever a resident moves in, there's a blessing ceremony, welcoming the new resident to the community. 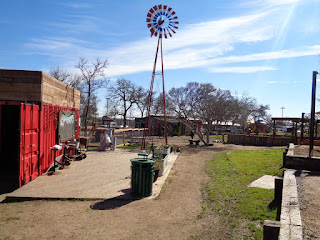 He told us there's a kind of community on the street, but when people are moved into housing in an existing community, sometimes the former homeless person feels ostracized, in part because they've lost the community they've had. That's why, he said, "we're all about forming relationships here." 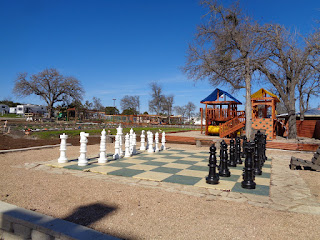 The community is designed to serve people whose housing needs have no other way of being effectively met. Except for ten "missional" families who live on site, the residents of the community have been chronically homeless (for at least a year in Travis County) and must have an assessed disability. All residents agree to abide by three rules (these rules are detailed in agreements that each resident signs before becoming part of the community).  Basically, each resident agrees to obey civil law, pay rent, and obey community rules. 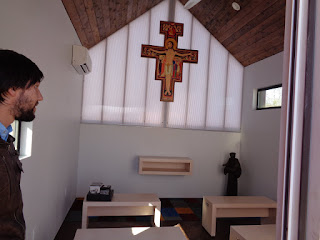 The community also includes a medical clinic, an art studio, extensive produce gardens, goats, beehives, chickens for meat and eggs, and a smithy. The entire community has internet. The micro-homes and canvas cottages rely on shared kitchens and bath houses within 150 feet of their doors. Each resident has his or her own secure space for keeping food in their kitchen. There are currently two chapels, where residents and volunteers can pray or, if they want, "yell at God," Matt said. Soon, a new building with offices, creative spaces, a computer area, classrooms and a sanctuary for worship services will be built near the center of the community. 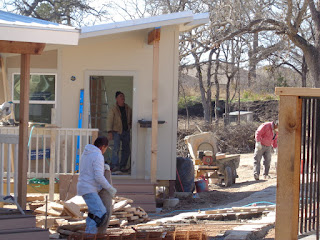 Churches and faith-based organizations have obviously been involved in the project since the beginning.  I wondered if the word "goodness," which was present on various signs all over the property, was a kind of code name for God's activity. After spending time at Community First! Village, I think it probably is.